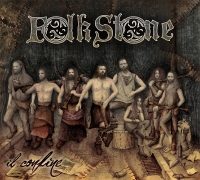 The Italian folk-rock band Folkstone had two releases for us in 2012. At the end of the year there was this beautiful DVD. And in spring there was a new album ‘Il Confine’.
The album starts with a very nice track Il Confine. And despite the fact I’ll still recognize folkstone’s style, there’s something different about it and this change is not an unpleasant one.
The second track Nebbie, which was also released as a single, starts with nice catchy guitar and this awesome bagpipe melody. This track is one of those you in which you can’t keep sitting calmly in you chair, you simply have to move on this nice medieval influenced song.
The very nice community singing in Omnia Fert Aetas gets to my spine at once. Wow what a nice song this is. Very different from the other songs, but oh so nice.
And when you feel like shouting along Non Sarò Mai is a nice one. Catchy bagpipes, catchy refrain, what do you want more of a song…
Well, a bit romance maybe? You’ll get that in Luna, a nice and easy song. Typically song for this region, normally not something I like a lot, but I have to say it’s nice, with some fierce guitars and the authentic instruments.
And oh yeah, everybody who reads my reviews sometimes knows I’m a sucker for bagpipes and there they are Anomalus. Bagpipes, bagpipes and even more bagpipes. And this all in a medieval setting, with nice alternations. I… Just… Love… It!!!
Storia Quanlunque is another somewhat more rocksong. Not one of the best ones, but still nice.
But Frammenti is again a supersong, with a nice intro with some authentic instruments and then becoming quite heavy when the guitars and the vocals start in.
Lontano dal Niente is one of the few songs ons this album which isn’t a their DVD and I can understand they can’t play them all, but this is another beauty with rather solid guitar and beautiful bagpipes.
Then it’s time for a little rest with Ombre di Silenzia, but is it? Yes and no, the song is quite slow but the guitars give it a rather solid base, showing even slow songs can be nice. The lyrics of Folkstone are a kind of poetry and that’s a beautiful thing. This one’s for instance is a beautiful poem about Death.
As remarkable as Folkstone is as a band, as remarkable was Simone Pianetti. The band has made this very nice song about the remarkable life of this man. And again the large section of Folkstone which is in charge of the bagpipes, cittern and harp give this song such a nice melody, it’s impossible to sit still.
After the Nomadi cover C’un Re they wrap it up with Grige Maree, a track in which they show once again which a great medieval rock band they are.

Il Confine is a great album. Folkstone has made a huge step from nice medieval rock to fabulous powerful medieval rock. They kept their delicious medieval tunes, but made it all far more massive, with rock-hard background of the usual rock and metal-instruments. But also the ‘authentic’ section of Folkstone sounds more massive.
The song-writing is fabulous, there are a lot of great songs on this album. Simone Pianetti and Frammenti for instance are songs which I added to my lists of favourite songs at once. But my personal favourite is Anomalus, I can play that one all day.
But above all the change is Folkstone’s sound is what blows me away. They entered the hall of fame of medieval bands with Il Confine and they’re now amongst the greatest bands in medieval rock. Il Confine is undoubtedly their best studio-album, but it is also the best medieval rock album there is!