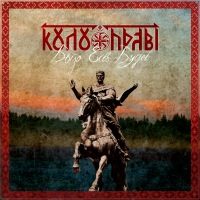 Kolo Pravi is a Folk Pagan Metalband from Belarus. The first album of Kolo Pravi ever, they released a demo in 2009, but now there’s this real album. This is self released album and that’s no shame. But when you do a lot of things yourself to save costs, you should at least cut the covers in a nice way.
This albums starts with modern war-sounds, which is quite unusual in a folk-pagan metal band. When this short intro is over, we get a tribute to all armies…
In a musical sense there’s nothing wrong with this track. It’s quite nice even, nice folk-melody with a fierce metal-voice, nice clean guitars and flutes.
The same goes for the other tracks. The guitars are rather clean for metal, but this gives it all a nice touch.
What bothers a bit in the whole album, is the quality of the recordings. In the third track, which is by the way a quite a nice track, with female vocals added, the poor sound is quite obvious.
And this is too bad, the compositions are quite nice. There are a lot of nice variations in style which goes from authentic folk-passages to fierce pagan-metal. From slow to fast, and with nice alternations in voices. The clean voice can be improved a little, metal-voice and female choirs sound good, although the last one must be samples, because the band has only three members all male. The use of instruments is very nice, with a large part for the ethnic instruments, besides the decent metal ones.
I can’t tell what’s is like lyrically, because I don’t understand a word an lyrics can’t be found anywhere. Most of times this doesn’t bother me, but it does a little on this album.
The sound-quality can be improved a lot. A lot of bands have demo’s with better recordings. And this is to bad, because the music is pretty good.