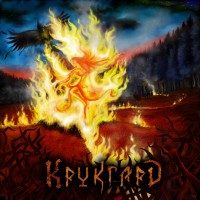 Taniec ognia (Dance of the Fire) is Krukgard’s first album and is supposed to be available as a free download on the internet. I couldn’t find it there.
The album contains 5 rather merry songs. A rather rough Russian male voice, and flutes, violin and bagpipe are added to the regular metalinstruments.
The first track The Master of Moon is a very good song, which gets you very curious about the rest of the album. Starting with the second track The Dragon’s Roar, there’s a lof of bagpipe added to the music. This is again a nice track if it weren’t it’s not in tune everywhere, and this is a pity because the music is very nice. The music is fast, but not of the humppaa kind, it has the strength of metal. The way they added bagpipe to their compositions is very nice and reminds a bit of the In Extremo and Folkstone, but the rest of the music is totally different and much heavier. The bagpipe is an important part of their songs, but the pity is it has a bit of an annoying sound most of the time. I’m a great fan of bagpipes and when they should sound better, Krukgard could become one of my favourite bands easily. Their songs are nice enough that’s for sure.