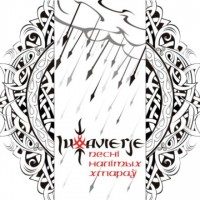 The Belarus formation Lutavierje has released their first full length album. The band released a split in 2010, but in 2012 it was time for the real thing. And here it is.
When I look at their line-up, I get a smile on my face immediately, bagpipes, flutes, zhaleika and violin. Yummy, I like those instruments a lot. Sound Age Production has a lot of nice bands in the whole range of folk- and paganmetal.
This is one of those albums, you can play at different volumes. I noticed this with a band like Fejd as well. When you play it al a lower volume it almost seems the guitars are backing up the folk music. When put up the volume, the music sounds a lot more metal-like.
I can appreciate this Give Yaryla! Is almost a folksong, with all these nice instruments, but the electric instruments make it a lot heavier. And the same goes for the rest of the songs as well.
They also use this nice female Slavic choir like singing, this makes it all very authentic.
A very nice composition is Spring in which the folk-instruments are oh so beautifully caressing my ears. Followed by the bagpipe-intro on the track Vyales. Much faster as Spring and with a very nice bagpipe in it. It should even be some louder in the mix, making it a Slavic equivalent of Folkstone.
In Oath we get this typical Slavic folk-melody, reminding of songs of Arkona and others. And again we get a nice folk-metalsong.

A very nice album for the folk-metalfans who like the (Slavic) folk to stay close to the original thing. Spiced up with a lot of metal this is very nice folk, and what is very likeable: with authentic instrument!
Lutavierje has done a nice job with ‘Songs from Poured Clouds’, when it goes on like this is may be raining forever…