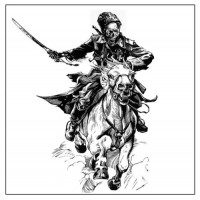 The Russian Pagan Black Metal band Nebokraj released an EP last December. This album is their second release.
This EP is entitled Morovaja Jazva (Black Death). The skills of these musicians are obvious, the first three tracks sound very nice. Sung with a clean voice with a delicious rough dark Russian sound, fierce and solid guitars, this band puts down a very nice pagan sound. It even sounds a bit folky sometimes, the flute/keys have are responsible for this element.
The fourth one is also very nice, it’s over 10 minutes, but it has this long hymn halfway the song. This makes the song not a pleasant one to listen too. I couldn’t find what the lyrics are really about, and I would surely like to, because the music of Nebrokraj is very nice.
If it weren’t for the last song I would have rated this album an 8.