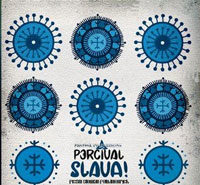 The Polish band Percival is one of those bands who have a split personality. Percival plays acoustic medieval folk and as Percival Schuttenbach they play folk-metal. It’s a kind of method we see with more bands, especially in Germany. So we got not only Percival Schuttenbach’s new album but also ‘Slava’, the new album of Percival. And for all those folk-metal fans who are enchanted by folk this is also a very interesting album.
Percival usually plays medieval folk, but ‘Slava’ is the first of a triptych of Slavic folk-music. The songs come from all Slavic countries of this time, where people are called south-Slavs. This means the music is much younger. The song are all from the Slavic people before the the separation in the different states of modern times. Therefore all Slavic people can sing the originals.
Percival takes you on a musical journey though ancient Slavia, the journey starts in Serbia with the song Gusta and they travel through Bulgaria with Delberino and like this they travel through the Balkan. The bands makes this an unique experience, all songs sound very authentic, but still up-to-date. No dusty old songs but very alive folk-song which should be played at folkloric festivals only, but which also can be played at an acoustic festival or market.
I can appreciate this album very much. It’s nothing for the die-hard metal fans, but when you’re interested in folk in general or you want to learn more about the Slavic folk-metal, this is an very nice album.
I’m very curious about the other two albums of this triptych of Slavic folkmusic. Percival shows they’re very skilled and know how to play the old folksongs in a way which can withstand time. And the two bands Percival and Percival Schuttenbach are equal and probably make each other stronger.