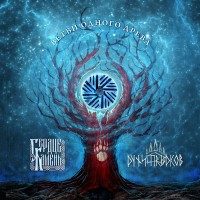 This EP of Serdce-Kamen is together with the one of Dukhiv Predkov the split album ‘Branches of One Tree’.

This is Serdce-Kamen’s début-album, but this doesn’t mean the brain behind, is an inexperienced musician, because the mastermind of this project is Alexej the ex-frontman of Alkonost. And when you get to listen to Serdce-Kamen this can be noticed. His nice raw metal voice, but also his love for using a second clear female vocal voice are clearly present in both ‘bands’.
In The Abyss of Starway are unfortunately some fake sounding keys. I think it’s a pity when you use synths for the traditional melodies. But Alexej voice is nice, he’s swallowing sandpaper all the time I think. These fierce vocals give the music a lot of power. The traditional clean female voice, is a typical Russian recipe, but it is the perfect addition.
Mother of Sadness has this nice female vocals leading in this beautiful composition. Very nice guitars in this somewhat melancholic song.
And in The Path of Slavonic Knight we get again female vocals and what a treat a nice duet by these two voices as well. The music is a bit more catchy.
Life is Russ! Starts rather heroic and is a proud song, with a lot of nice pieces of guitar in it. A beautiful tale, told by Alexej’s metalvoice.

A very nice EP by Serdce-Kamen. This EP has nice compositions of proud heroic Russian music, done with two beautiful voices. The combination of these male and female vocals is a very nice one. The only thing which bothers me a bit on this part of this album are the keys. I would rather have left them out and replace them by some authentic instruments. They’re a bit fake and too theatrical.
But I like to hear more from Serdce-Kamen in the future, he has proven he’s able to make very nice compositions.

Dukhi Predkov has made a full length in 2011, and has now this split album with Serdce Kamen.
Their part of the album starts with nice guitars in Before Death, unfortunately rather annoying keys are added to this one. The flutes make up a lot of this bad sound. Really a pity because it a very nice and catchy song.
The flutes in Prophetic Dreams are rather nice, they seem a bit to fast. This causes it feels a bit hasty. I’ll skip my comment on the keys. Then there are very nice fierce vocals. A fierce song with a catchy feel. In the intro of The Sun behind the Mountains the keys are only laying down a background for the flute and that’s much nicer. A nice varied composition.
Fire is rather straight forward an doesn’t have this catchy feel of the other songs. Undoubtedly this will be the best track for a lot of metalheads, but in my opinion it can’t keep up with the other three tracks.

Dukhi Predkov’s contribution to ‘Branches of One Tree’ is also very nice. The title of this split is obvious, because both ‘bands’ have a lot in common and are definitely branches of the same tree. This half of the split album is somewhat more catchy then the first part. The addition of the flute is very nice. The keys is this part are sadly enough not nice. When they stick to laying down a background it’s OK, but when they’re playing lines they don’t sound nice. But I’m sure when something is done about this, you have a very nice band which is capable of making great stuff.

Branches of One Tree is a great split, with two bands which aren’t the same, but it’s almost impossible to like one and hate the other. It’s even difficult to say which bands sounds best on this album, they’re both very strong. Serdce- Kamen and Dukhi Predkov did a great job with this one, it worth listening too.