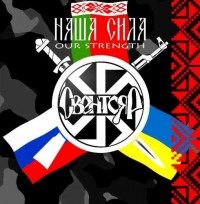 Sventoyar has released a rather short full length with a total time of a little over 42 minutes, which contains 7 tracks.
The album starts with a long track in which the nice female vocals can be noticed. They’re a bit different from what we’re used to, although they sound Slavic, they don’t have this typical folk-style way of singing. There are some strange pieces is this track which are very nice when you listen to them some more. The nice guitars have a very nice thick sound, and it sounds quite nice.
Also in the somewhat slower second track the voices are very nice. They use clean male and female voices and a nice male metalvoice. And they mix this in a very nice way. The use of ethnic instruments in this one is very nice. Unfortunately I can’t find anyone who plays this instruments in their line up. I hope they don’t use samples for this.
In the third track we have some typical Slavic singing and this one sounds like a real folk-song but in metal-style.
The fourth track starts with a very beautiful guitar-piece which sounds a bit dated, but it’s really nice. The intermezzo in the song is slightly less, the sounds used for this are not that nice and that’s a pity because it’s a very nice song. The voice of their female singer Poloneya is fabulous.
The folk-influences in the fifth track are again very nice. Alternated with a pounding metalpiece of raging guitars, fierce drums and nice bass the ethnic instruments and the folk-like voice put down a very nice track.
In the beginning of the sixth track I almost believe I’m back in the eighties with their alternative new wave, but soon after this beginning this makes place for real metal. The vocals in this long track are again brilliant. And the bass-lines in this one are so nice and thick, I love it. It’s a varied composition and sometimes you think WTF, but this feeling immediately fades away when they start with another fine piece.
Which brings us the the final song of this album which is again such a nice track.

Remarkable album by Sventoyar this is. It’s full folk and full of metal. But it’s different. The female vocals are everywhere in a traditional style and that’s nice, because it makes them different. The folk parts come from authentic instruments and this sounds nice. I can only hope they can do this live as well, because I couldn’t find anyone who played this instruments in their line-up.
There are some changes and pieces on this album, which I have doubts about, but it’s immediately forgiven when they go on with another nice idea.
I think it still deserves a very good rating despite of the doubtful elements because this band has such a nice sound of their own and very original ideas.