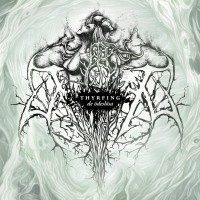 After they signed with Noise Art last year, Thyrfing finally releases an album after five years, with a special title de Ödeslösa. And they’re back for sure with this album.
With Hels Vite Jens Rýden proved himself as a qualified new vocalist in 2008. Again a few changes in their line-up were made. Fredrik Hernborg came to the band as their new guitarist in 2009, Joakim Kristensson moved from drums to bass and Dennis Ekdahl filled in the empty spot behind the drums. You can’t say nothing is happened with the band.
This album starts with an epic intro, but fortunatelly after 25 seconds hell brakes loose. Strong riffs and powerful thriving melodies.
In Veners Förfall is a tiny and siple piece of piano. But this small add makes it a fine and strong track, something which had to be mentioned.
During the years there was more space for the guitar in Thyrfing, they keys went to the background a bit. This continues, al least in the first half of the album. There is an epic background but no emphasis on key-compositions.
Another thing of Thyrfing’s music is it became slower and heavier. This reached it highest point on Hels Vite. On De Ödeslösa this heavy pieces are still present but the speed lies a bit higher.
The mixing is done by Jens Bogren this time, and he’s not bad at all in this. But I would prefer the corporation with Tommy Tägtgren, or his brother in stead. The old albums were mixed very well.
Illvilja has this small moment of rest, which gives you the opportunity to reload for the second part of the album. This half is more epic and more melodic and it has a number of acoustic pieces. It offers more variation besides the strong guitar-riffs. Especially Kamp is a very nice track, which you can keep listening for ever.
Where they had a lot of English titels in the past, De Ödeslösa is written fully in Swedish.
In the days of Hels Vite they kind of went in a new direction and this direction is continued on De Ödeslösa, they’re slowly moving away form the vikingmetal. This album gives you an epic feel, and that’s the big strength of Thyrfing, their music can do something like that to you.
With De Ödeslösa we came to the last track of this album. This titletrack is one of the best songs of this album and a worthy final.
All in all the changes in the line-up did Thyrfing no wrong. I’m looking forward to Paganfest, so I can listen to this songs live for the first time.
Thyrfing has exceeded Hels Vite with this album by far and they have proven they belong to the best bands.