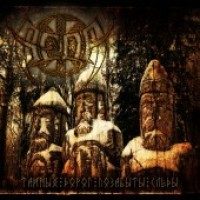 Veda is a Russian folk-metalband in which the guitarist of Smuta sings and plays flute. And this is nice, because he has a good metal-voice. But he’s not the only vocalist in Veda, there’s also a female singer in this band. The combination of this male metal-voice and clean female vocals is not unique, especially in Russia this is quite popular. But that’s isn’t a bad thing either, the contrast between these two kinds of vocals is very pleasing for your ears. They use the usual metal-instruments and besides this they added keys and flute for the folk-influences. I’m not fond of keys for these things, I like the open sound of ethnic instruments more, but it suits to the Veda sound. Most of the time there’s a thick layer of keys underneath.
This début-album is called Tainuyh Dorog Pozabuty Sledy and it contains 9 tracks. It’s not all tracks sound the same, but when you like one, you probably like them all. All songs are made within the same frame. The only thing changing a bit in their sound is there’s more space for the flute towards the end of the album. And I must say I like that even more. So, in my opinion the best track is the last one. And I hope they will continue in this direction with their next album.