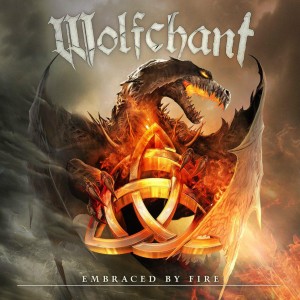 For  several years these Germans are active in the pagan-metal scene. After A Pagan Storm these men gained quite some name, to turn silent again. Then they showed up with Call of the Black Winds, but caused to bad promotion, this didn’t really make much name for them. So now it’s time for a strong embrace by Wolfchant, Embraced by Fire.

Drumbeats open an intro that mostly reminds me of Pirates of the Caribbean… that isn’t really what I hoped, but from this point, everything gets better.
We kick-off with a power-metal guitar sound which proceed in a very epic and magisterial sound. Than the pagan gets loose, but not the way we’re used to from Wolfchant. There are less grunts, and the clear vocals we got used to on Call of the Black Winds got expended. But of course there are still grunts, otherwise it wouldn’t be Wolfchant any more of course.
Wolfchant is still full of pagan guitar riffs that characterized their music, but they made it clear they got off the violent road and turned into the bombastic heroic way.
The next song is called Element, and again you’ll notice that the bombastic keyboard is on top of the rest. As well we hear some guitar riffs, but they sound more power than pagan, but the grunts are as we were used to from the older Wolfchant work, raw and brute.
Unless the song is overall up-tempo to swing your hair around, this song as well has several slow bridges. On the one hand, this is a great musical bonus and a great variety in the song. On the other hand, it really slows the song down. We receive another guitar solo but as well, this one doesn’t sound as pagan as we know it from the previous works from these Germans.
Turning into red starts with bagpipes and drums with an addition of a whistle that I’m almost sure of is made by an keyboard. It’s beautiful, though it doesn’t sound as Wolfchant. A heroic choir with pagan-guitars, but when the song really busts off, it’s not as raw as you’d hope.
The song Einsame Wacht sounds pretty much like the song Call of the Black Winds, but once again it’s more bombastic and not as brute as the earlier work.
This pretty much counts for the entire CD.
On the end we are treated with Winter’s Triupmh, which is a proper song to sing along with, but will touch every single heathen warrior amongst you in your heart as well.

My conclusion is quite double. As first I should say that the album is musical very strong and is really good to listen to. But still I can’t deny that I miss the pagan-sound, the raw and violent Wolfchant is gone. But I must admit that I really like the new sound as well. However if I must choose, I’d rather go for somewhat more grunting and raw pagan. Wolfchant keeps developing themselves and you can never say that there records are too much alike, and I’d definitely do not want to miss this one in my collection! So be sure to get yours!