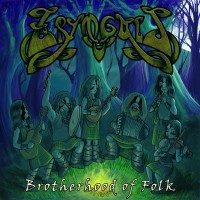 We don’t get new releases from Argentina very often, and when we do it’s usually an album with lots of beautiful bagpipes in it. This time we received an acoustic album by Zrymgöll. This is their first album after their demo in 2010. Quite an unusual choice to start with the acoustic versions of your songs.
Writing this review I realise how nice it is to review all these albums. It’s not only a good opportunity to listen to them all, but it’s makes one modest at some times too. Prejudice is just around the corner and when I listened to Zrymgöll’s album at first, I only thought is was rubbish, and why do they record this fun-session and release it. I would have put it in a drawer and would probably never have listened it again, but I had to write this review. So I listened to it again, the second time it made me smile at many moments, because it’s kind of funny sometimes. The third time I enjoyed more songs and today I watched myself putting it on for fun.
The album starts with A Hard Day, with an terrible accent which makes it very funny when you listen to it more then once, it has a kind of campfire feeling, with very nice percussion. In short a great song.
Pagan Wood a song from their first demo is a song with a kind of blunt troll kind of singing, together with the flutes and accordion. You can almost see the stumbling trolls around this campfire.
The next track Raven’s Song is again a very nice one. With acoustic guitars and a nice choir of males, you get the urge to grab a pint of beer, light a fire in your backyard or in a park nearby and sing along.
The title-track of this album Brotherhood of Folk, has this nice piece with accordion alternating with a piece with a low choir. A rather slow one, but nice too.
Wind Free starts with acoustic guitar and then flute and violin join in. Seem to be rather serious this time with a lovely folky sauce. A bit of weird pieces at the end, but a very good instrumental track.
Another song from their demo is United we Stand. It shows the band knows what’s it doing with this nice acoustic version of this song. One of the better tracks of this album.
I can’t imagine you get cold with this kind of music, plenty of alcohol and a burning campfire, but when you do, the band has the solution for this. Heating the Cold Night a nice happy tune, it’s in songs like this, you get the feeling they’re actually around a campfire with some liquor recording their party. But it sounds very nice and it’s worthy to be released at an album.
Leaves us with the very nice Skyclad cover Penny Dreadful, which is already a brilliant song, but the version of Zrymgöll is very nice too. I’m positive the guys of Skyclad can appreciate this version too.

What a fool I am, I had almost put this album far away after the first time. But you have to give it a chance and listen to it a few times. Then it becomes a wonderful piece of work.
It remains a strange move to record the acoustic versions of your songs first, but the only thing which counts is it sounds really nice.
Thanks Zrymgöll for this beautiful piece of work.