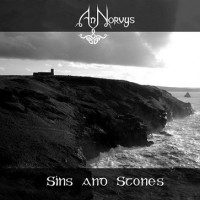 After their fabulous début EP of 2011, it’s about time An Norvys comes up with something new. But here it is Sins and Stones. This is again an EP with four tracks. And this is not the only thing which is in line with their previous work. The cover of this albums breaths the same atmospere of One and All, their previous EP.
And another thing is the first song Matthew Trewhella, which is part II of the song Morveren of their first album. And as we know of the first album it’s a very nice tale, and a strong composition. But where the female voice was good in the first record it’s excellent in this track. Liliane’s voice has grown a lot, it seems more mature, more ripened. The male voice is a nice add too I must say and where the female voice had improved a lot, the violin has grown with it. It’s less lovely, it’s still classical styled, but the pieces are more daring then they were in the first record.
And also the song Agnes & Bolster sounds a lot more metal then we’re used to. It becomes obvious the whole band has grown, because the guitars demand a larger role for themselves as well. Where they only laid down a carpet where the singer and violin-player could play on in the first record, they step in the spotlights themselves now.
The Merry Maidens of Boleigh is another daring composition. It’s beautiful to witness this growth in the band as a whole.
And with The One Who Slew Giants which is part II of Jack the Giant Killer of their first record, we have again proof this album has a close relation with the first one. Very nice variations in this track, the music becomes louder then ever in this one. The vocals really drag you along on a giant-slaughtering journey to Wales.

What a progress has An Norvys made with this album. Their first was a terrific album especially when you take into consideration it was their first. They have developed their style even more and made it more exciting. When you like folk-metal with clean female vocals, An Norvys is the band for you!