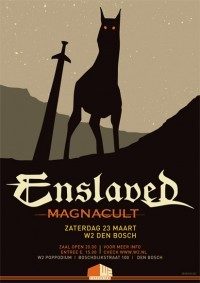 At what should be a typical spring day at the 23th of March, I fought myself through the ice and cold towards the W2 in Den Bosch. Enslaved and Winterfylleth together on stage. It promised to be a night filled with solid blackmetal with a lot of pagan/progressive influences.

Bliksem
Well… I can be short about Bliksem. Slightly black-tainted Thrash, so it isn’t really in our field of expertise. Didn’t do much with me on a musical level, though they’re really enthusiastic and had a nice stage-performance. Bonus points for the beautiful front lady!

Winterfylleth
Winterfylleth. When you’d see them walking across the street you’d have no idea they’d play in a paganblackmetalband. However, they do, and they do it rather well! While the bass and the drums were a little bit loud in the mix, everything was clear to hear. The stage-performace was a bit static, though all songs were played with a lot of dedication. Also great respect for the guitar-player, who continued playing even though one of his guitar-strings broke halfway through the last song. A more than worthy opener for Enslaved, which I’d love to see another time!
Score: 8/10

Enslaved
And then it was finally time for the headliner of the night; Enslaved. Nothing could’ve prepared me for the show these guys gave away. From opener RIITIIR to the closing song Isa, one highlight was closely followed by another. The band was enthusiastic, and this worked contagious for the audience. A lot of headbanging was the result and there even was a pit (at moments where it didn’t really fit). The stage-pressence was truly awesome, the band almost flew over the stage, making a lot of contact with the other bandmembers and the audience. Besides the though poses the bandmembers made, they all played their parts perfectly, I couldn’t hear a single mistake throughout the show. However, not everything was perfect this evening. The vocals, especially the grunts, were a bit to soft in the overall mix, and the drum-solo felt a little bit superfluous in my opinion. Besides those small remarks, the show was perfect in every other way, and it was a total pleasure to see this band live!
Score: 9/10