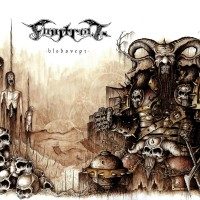 After a long wait, it’s finally there, the new album from Finntroll! Since Finntroll always delivered high-quality material, I was really curious to find out what the new ‘Blodsvept’ would bring us.
Probably you ask yourself what this album sounds like. Well, imagine you’re walking through the forest, the birds are whistling and everything is serene and beautiful. Then, all of a sudden, the sound diminishes and you hear a cracking noise. A loud roar and a pack of trolls is stampeding towards you. End of all peace, when they pick you up, throw you around and use you as a doll for their weird form of primitive dance. It ends in a big feast filled with dance and music. A feast where it seems that you are the only victim.
And that’s what it sounds like. I know that most people can’t do much with such a description, so I will explain it a bit further. The new Finntroll sounds brutal, heavy and without compromises, while on the other side the album sounds more danceable, more troll-like and more groovy than everything Finntroll has released ever before. Finntroll still makes blackmetal with a lot of humppa-influences as we know so well from them. However, this album sounds a lot more theatrical, and is a lot more diverse. Not only between songs, but also halfway during songs you are surprised because the song continues in a totally different, opposite way. Where ‘Blodsvept’ is a nice brutal mosh-song, ‘När Jättar Marschera’ is for example more cumbrous and rude. The party starts with ‘Skogsdotter’, possibly the happiest song Finntroll has ever written, with a leadrole for the banjo.
Finntroll’s got no boundaries for this album. As vocalist Vreth said, this album sounds like a ‘combination between Boney M and Borknagar’. And while it sounds strange, this is a perfect description of the album. This album is more brutal, but on the same time more cheerful and stranger than previous work of Finntroll. However, this album has become a true masterpiece, and can already be listed as one of the best releases of 2013.