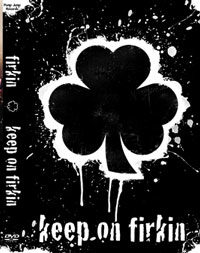 Firkin is releasing a CD ‘Keep On Firkin’ soon, but they released a DVD with the same title late 2012.
Firkin is the Hungarian equivalent of bands like Flogging Molly and Fiddler’s Green, with their Celtic Folk Punk. At this DVD we find the same songs as on their upcoming CD, but of course we can also witness what their doing. And in a nice easy violin intro we see the band enter the stage. This intro has a nice feel, it’s really building up tension. And when their singer enters the stage we get drowned in their music Borfohász sung in Hungarian is a true folk-punk track, nice with lots of energy and merry folk-tunes.
After this we get the well known song Rocky Road The Dublin sung by a different singer with a somewhat more raw Irish voice. And I must say I’m glad we get another Hungarian one after this, Vezet majd a szél, the band proves their very capable of writing their own songs. Of course the traditional songs are very nice too, and I can fully understand you want too play them live, but it’s nice too notice the band has nice songs of their own.
Galway Races is another nice Irish one and using traditional instruments like violin and flute, the band has a nice ‘Irish’ sound, and the same goes of course with the famous Wild Rover.
But after this we get something completely different Belfast Child originally done by the famous Simple Minds, and despite the fact it’s about Belfast, it’s not an Irish folksong. This one is sung by their keyboardplayer, the song always remains a nice one and they play it well, but it’s sung quite subdued and it misses the energy of original vocals.
After this it’s time for both lead vocalists again in Beggarman and in Eileen Og, in the last one we get almost Jethro Tull like flute. The camerawork is quite nice. It’s all filmed with different camera’s giving us different views of this nice concert.
After all these traditional songs it’s time for a Hungarian one again Kék volt az égbolt. The audience is very enthusiastic so asking to sing and shout along gives a lot of response and that’s how this music should sound to.
They easily mix the songs which are well known all around the world with their own ones, after a rather speed-up version of Lord Of The Dance and a nice Drunken Sailor Song we get Hetedhét székely and Jó and after this Whup Jamboree, and I must say this full speed version of this song is very tasty.
With Drunken Lullabies they pay a nice tribute to Flogging Molly, a nice one, despite of the accent, maybe this one should be in Hungarian as well.
But with Firkinful Of Beer which is a very free Hungarian translation of Whiskey in the Jar and Igyunk Pálinkát we get a load of their native language.

A very nice DVD by this Hungarian Celtic Folk Punkers of Firkin. Nice video and audio recordings which drags you in this highly energetic concert. This is how this music is meant to be, over an hour of pure joy. For the fans of folk-punk: Buy them them both CD and DVD and just Keep on Firkin!