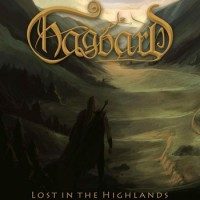 While we’re all waiting for Hagbards full length they’re about to release a single which will be available on Bandcamp.
I didn’t know a lot of their music, but the songs I’d heard were rather merry ones, despite of the raw vocals the rather merry tunes create this kind of happy feeling.
The first track of this single Beserker’s Requiem isn’t like this. It’s more melodic, slower and reminds me more of bands like waylander, but this is also caused by the vocals. A very decent compositions with a lot of variations in speed and style. The band shows it also capable of creating a much more raw sound.
The second track Let us bring something for bards to sing, starts with a Korpiklaani-like intro. Although the lead-vocals remains quite raw, the male-choir singing and the much merrier tunes make this an completely different song.
It looks like Hagbard has made a nice overview of what they’re up to with the single Lost in the Highlands. Despite the diversity of these tracks they don’t seem to be lost in music. They fit in one style. A nice single by Hagbard.