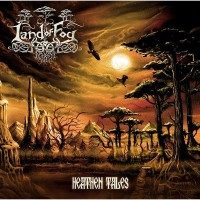 Land of Fog, I had never heard of them before. Which isn’t weird, because they come form far-away in Brazil. So, the chance to see them live once is rather small. With Heathen Tales they released their first full-length. And this one is loaded with no less then 12 songs.
The first track starts with a weird yelling man, probably he’s tortured or something like that. But fortunately this ends soon, because I want music and not a crying man. The guitar-riffs sound very nice from the start, not very complicated, but catchy. The vocals have a nice balance between clean and harsh, but they could have been a little stronger, the disappear when guitar and drums come in.
I’m missing some variation in the guitar-pieces. The changes in speed make it doesn’t become dull, but there should be some more solo’s in in.
The keys are always in the background, they may come to the front every now and then. Just like the flute, which can be sometimes. Except for track 5: Heathen Tales where it can be heard clearly, but unfortunately playing along with the guitar an not a something different.
When I read the title of the next track I got a little afraid. Nothing else matters, fortunately it’s noted: Just revenge and it doesn’t sound at all like the ‘over-covered’ song with the same title.
13th warrior is in a musical sense one of the better tracks of this album, nice guitar-riffs and the other instruments form a whole.
My spirit flies free is a worthy final track, but L’ultima battaglia is with it’s female vocals a really beautiful end to this album.
Summed up this is a fine first full-length with some small points of improvement. Land of fog missed some opportunities where flute and keys are involved. It would be nice to hear the female vocals more often and variation in guitar-pieces could be improved as well. But besides that it sounds not bad at all.