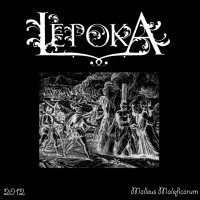 Lèpoka made demo with only two songs. Malleus Maleficarum, is a very nice track with nice authentic instruments like nice whistles and violin. The vocals are in a typical Spanish way, like bands as Saurom and Mago de Oz, but the music has a lot more folk-influences, which makes it very nice. Like in most of the Spanish bands the metal-influences come from melodic metal and we can also get guitar-solo’s, but the whistles are the nicest thing.
Yab dabadaba dai is the second track and the title says it all. What do you expect with a title like this? Well, you’ll get that. A nice track with lots of folk in it, but still loud enough and…
with lyrics everybody can sing along, I don’t speak Spanish but I can do this.

Nice one by Lèpoka. A demo with good quality. Good melodic based metal with lots of folk-influences. The whistles are taking the lead in this band and that’s a nice thing, they’re great!