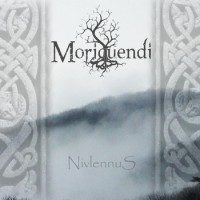 Moriquendi, a Frenchman who decided to make music on its own, instead of forming a band. In 2006 he made his first EP and now he thinks it’s time for a full-length album.

Slow and relax the records sets off with the intro called “Trough the clouds”. You immediately get into the sphere where this album is going, slow, doomy blackmetal. The First Hour of Day is the first real song, the tempo stays really calm as on the entire album. The mix isn’t that good and soon you’ll notice that unless it’s musically quite good, he could better have looked for a singer. If you listen on you can hear that he makes it up with a much better grunting.
The music personally reminds me most of the Chinese Fu-Xi. The slow tempo and calm sound makes that the record is very easy to listen to, but as well that it doesn’t really stick in your head. Savage Hunt kicks off with with somewhat more power than the previous song, but it’s just “somewhat” more, because you will not get really rough pieces from Moriquendi.
The title song Nivlennus, it turns out to be just a keyboard track which you would sooner expect in a film trailer than on a CD. Following up is Lost in the Forest, where the tempo, if possible, gets even slower. As well the rest of the album gives just a mix between Enya with some edition of electric guitars and a few grunts to add a bit of metal.

The album is obviously made one man with an idea in his head. Great to hear he can do this all by himself, but it’s not that special. Neither is it a bad album, and unless it doesn’t have any masterpieces, it’s easy to listen to when you’re busy doing something else.