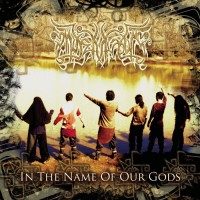 Muyzkkubun, a Colombian band, with for me an impossible name. The number of folk-metalband over-there can be counted on one hand. Horde Thor is another one from this South-American country.
After a slow start Muyzkkubun has released this full-length album. ‘In the name of our Gods’ is besides the title also the first track of this album. The start is melodic but has a lot of pagan although and the grunts go along with the melody. It reminds me a bit of the heroes of Mithotyn in the vocals.
‘Land of Eldorado’ starts with an intro and at that point the sound becomes a bit of a burden. Each instrument seems to be on its own, which causes a cacophony. It’s now a whole but more like a collage.
Further on at this album I notice I’m listening with pleasure to it. I like diversity and this album grabs my attention. Melodic pieces sometimes worked through the fast Black pieces with very subtle flute-tunes in the background.
One of the longer tracks ‘And the nature will bless this land’ is my favourite track. Nice tunes, solid pieces in between and a after a quieter break it bangs on loud.
This album tells a story and has a nice flow. Don’t expect merry sing-a-longs, but no raw pagan either. Muyzkkubun delivers a nice piece of Pagan Folk Metal!