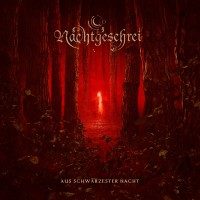 The German Medieval rock-band Nachtgeschrei has released a fourth album ‘Aus schwärzester Nacht’ with Massacre Records.
Nachtgeschrei has a rather mixed repertoire. They describe it themselves as Folk/Rock/Metal/Medieval, and that can be heard on this album. Sometimes you hear a Saltatio Mortis like medieval tune, but at another moment you can hear the dark edges of Letzte Instanz.
Starting with a nice guitar in Sirene, they immediately hit off with a catchy medieval rock-song. Maybe not the best song I’ve ever heard, but a catchy start of this album.
In the next one Geister, die uns Riefen is a prominent role for the authentic instruments, but they flanked by solid guitars and drums. But the song is a lot harder than the previous one.
Flamme has a very nice choir in the second half which sounds familiar, but I don’t know why. A very good song. ‘Bleed once again and I know who you are’, brilliant.
Then we shift back for the intro of the next track Spieler. Which has a refrain which is a lot louder fortunately. And by now the the title of the album becomes obvious. In English it means From the Blackest of Night and the songs have all a dark edge. In this songs life turns out to be a play and the first person isn’t dead yet…
And Nachtgeschrei goes on like this, with a nice variety of of songs. Unter Deinem Licht is a real ballad, and the accordion gives it a nice twist. After this the catchy folky Na Sdorowje! To go on with a typical German rock-song like Am Rand der Welt. And then they change easily to a catchy solid track as Für alle Zeit which reminds a bit of Alestorm in some pieces. But al songs have a dark edge at this album. Even when the music sounds rather merry the lyrics have all this nice dark element.
For the buyers of the digipak there are an acoustic version of Herbst (from the Ardeo album) and an Orchestra Edit of the track In Die Schwärze Der Nacht.

Nachtgeschrei has made a very solid album with Aus schwärzester Nacht. The music is very varied, but this is the trademark of these Germans. Nachtgeschrei won’t get into the top 5 of German bands in this genre. But it’s a very decent and solid album. The songs are all of very good quality which makes you stay listening to this one.