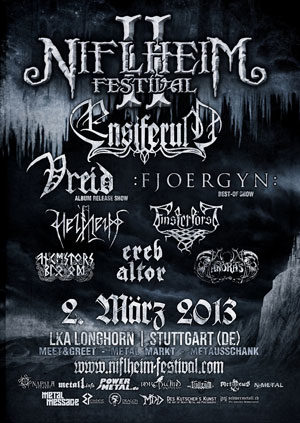 On a cold saturday in early spring we travelled down to the German city Stuttgart for the Niflheim festival. With the promise of almost ten hours of music provided by eight bands, the excitement was quite high.

Apparently there were some technical problems right before the opening of the venue which made the organisation decide to open the doors later than announced. When we arrived to the venue there was a long line of people waiting to get in.

Andras
Unfortunately we missed quite a big deal of Andra’s show due to waiting outside in line. By the time we finally got in Andras was up to their last three songs already. Even though we just came in it was pretty clear that they had won the audience already. A lot of people were headbanging, putting horns up and clearly seemed to enjoy themselves. Quite special for an opening act!
The band seemed to really enjoy themselves too as they seemed quite happy on stage. That made it a real pleasure to watch them. They seemed to have everything under control and therefore I wasn’t too surprised when the audience asked for more.
I didn’t know this band yet but I definitely want to see more of them!

Ancestors Blood
After the successful opening of Andras it was now time for Ancestors Blood to conquer the stage.
I thought their opening was a bit chaotic. One moment they were on stage soundchecking and the next moment the intro song starts, the roadies ran off stage and the show, apparently, began.. There was a musical intro while the musicians, apart from the singer, were already on stage without playing. They were standing there exactly the same as they had been standing there before in the minutes during the soundcheck. Not very exciting and made it look a little messy. I was wondering why they didn’t use the intro for a nice stage entrance.
The singer however did make use of a stage entrance. He was wearing some sort of cloak that was decorated with drawings that reminded me of cave paintings. He was carrying a hand drum with images on the skin that matched the images on his cloak. Even though it did match the theme of the band I didn’t like it too much. In my opinion both the costume and the drum looked a bit off by the fabric they were made of(in other words, it just looked too simple and cheap).
During the moments that the singer was not singing he’d hit the drum in a rhythm that looked quite random and didn’t bring any musical addition to the songs. The stage act was really distracting me from the music. The audience also seemed to cool down a bit. There were some heads nodding to the rhythm but there wasn’t much activity going on.
When Ancestors Blood finished their last song the singer left the stage without receiving the applause or thanking the audience. I didn’t like the show too much. I think they could do better.

Ereb altor
This is a band that I personally didn’t know before so I was up for a surprise. These Swedish men won the crowd and applause already during the soundcheck by singing some Bathory. That was setting the mood and the excitement among the band and the audience. They played their show pretty nicely. They all seemed to work together really well and seemed to enjoy themselves on stage. Although the music was a little bit more quiet and the vocals were mainly clean, this was a nice performance! If you’re looking for some refreshing viking metal, make sure to check them out!

After Ereb Altor there came this announcement that Helheim would switch places in the running order with Finsterforst because Helheim needed to catch a plane. Instead of the promised hour they would now play forty minutes. Nevertheless they played a great set including the song Nattravnens Tokt from their very first album. They announced to release a new album later this year.
What I really liked about their performance was that they used really cool visuals on the screen behind them. A variety of spinning symbols and videos were shown and synchronised to the music which made it even more interesting to watch the stage. They ended their set with a cover of Motörhead’s Ace of Spades. The crowd went nuts. 🙂

Fjoergyn
Then it was time for the German Fjoergyn to impress the audience with their avantgarde black metal. I had not seem them live before so I wasn’t sure what to expect from them during a liveshow but they did pretty good. They created a really nice ambience and the crowd seemed to enjoy the show. I liked to watch them play since they were all really tuned in to the music. Although they played really well the singer was a bit off sometimes. The music held a great balance and brought musical surprises right at the moments where needed.
Another great surprise was that they welcomed Ivo Raab on stage, one of the organisers of the Ragnarök festival, for two Fjoergyn songs. Ivo added some grunts to the band and.. I’ve gotta say that this man is a sexy beast on stage haha. His vocals complimented the band really well and made it a little bit more heavy.
All in all a great performance.

Vreid
After the somewhat more quieter performance by Fjoergyn it was now time for these Norwegians to shake up the audience again. And they did and they did it well. They played a really good, solid show. Also it was the first European show after the release of their recent new album Welcome Farewell so they were quite excited to present some new songs to the German audience.
What can I say.. Amazing show!

After seeing so many Ensiferum shirts in the audience I wasn’t surprised that many people rushed to the stage after Vreid had played their set to wait for Ensiferum. The audience was totally ready for what was to come.
Sadly Ensiferum started 25 minutes later than planned. The crowd was impatient and started calling for them. When they finally made it to the stage the place was turned up side down with all these Ensiferum fans in the house.
The band members themselves seemed to really enjoy themselves as they were running around the stage. They played for 105 minutes and although they played really well, to be honest, the setlist didn’t excite me that much. They played a lot of songs that they usually play and which works like magic with a such a party crowd, but personally I was hoping for something more rare. They played a lot of the latest album but luckily also some older stuff like Battle Song, One More Magic Potion and, one of my favourites, Lai Lai Hei. Great performance, high in energy and happy spirits but not very refreshing from what they usually do. Nevertheless the crowd loved them and they loved the crowd. Viking party guaranteed.

Finsterforst
After Ensiferum a huge part of the audience went home which made room for people who were there to see Finsterforst. Finsterforst had switched places with Helheim so that Helheim could leave early to catch their plane. This gave Finsterforst 20 extra minutes which they used well. The stage was occupied by the seven, half naked covered in mud men from Germany and they did a great show. After such a long day(and 5 black metal bands the night before) I was pretty tired during the switch from Ensiferum to Finsterforst but Finsterforst woke me up again. They made me forgot how tired I actually was and I was just really enjoying their show instead. They brought the accordion player which was a great addition to their show. They also seemed to care about having contact with the audience. They were seeking eye contact during the songs and when announcing new songs they responded to whatever the crowd would shout to them. Apparently a guy from the audience had contacted them before, asking if they would allow him to come on stage and use that opportunity to tell his girlfriend he’s sorry. Although it sort of was a little distraction from their performance, I think it shows how kind they are. Also during another song the singer would walk up to the first row and have some fans sing the lyrics through the microphone. Very interesting music.
One of the best shows I’ve seen this weekend and a great way to end the festival!

At 1AM, after ten hours of music the Niflheim Festival came to an end.
This is a festival I can highly recommend. It’s indoors which is nice for the time of year and hosts great bands. The hall gives the opportunity to sit down and rest a bit while you’re still able to see the bands on stage. There were some shops selling a nice selection of (rare)CDs and merchandise for good prices and apart from Ensiferum they sticked pretty well to the time schedules. A little bit of criticism(sorry guys, has to happen) is the limited offer of food. Especially for a full day festival it is nice to have something that is a bit filling(I gave up the search for healthy food on festivals). Now there was only was one shop that was selling your typical German breads with sausages. Another option would be taking the risk of missing a band for a trip to McDonalds or Burger King at the other end of the street…

But all in all. A great festival with a really friendly organisation. Fantastic bands and a great venue. And all pretty reasonably priced. This festival is definitely a recommendation! 🙂