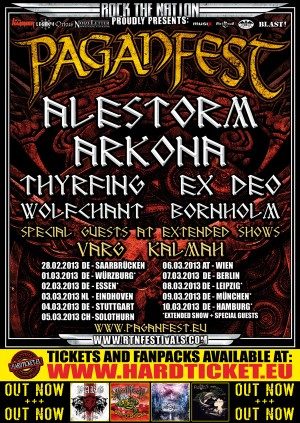 The past years Paganfest was settling in Oberhausen, so I was surprised I had to go to Essen this time. These towns aren’t far apart, so it’s no problem.
The Weststadthalle was the stage where it all was happening. A much smaller venue and not as deep as it broad. This means you’re always near to the stage.
There weren’t as many people drinking outside as I was used to and there were less people inside as well. It was nice and cosy and not to crowded.
I had booked a small hotel (just around the corner) and I had to check in, which caused I was too late for Bornholm who played first. A pity because this was one of the bands I’d liked to see.

Wolfchant
Wolfchant was the first band I witnessed, while enjoying my German beer. With their new album they went in a slightly different direction and I guess that’s why I found their performance a lot more interesting than the previous ones. Two vocalist at the stage is something else (and it reminded me immediately of Heidevolk). A nice performance and the audience got warmed up nicely.

Thyrfing
Thyrfing was next on the list. The band is around for quite a long time, but they seemed to have become less known recently. The gig was a banger, despite of the slightly suppressed melodic influences. I doubt if this was noticed by the new listeners of Thyrfing. Awesome show.

By the way I have to give some compliments to Rock the Nation, again they have a varied line-up. This keeps in interesting and gives a boost to the scene. I was a little bit afraid we would always get big names at the tour in the future.

Kalmah
Kalmah, a little bit a strange one between these bands. They didn’t find themselves a complete fit in, but an offer like paganfest can’t be put down of course. Kalmah could only be seen at the extended shows. The Fins lookes young but they have a significant repertoire, with 6 studioalbums. This could be noticed in their performance. A very tight show!

And then it was time to grab a bite. There was not much opportunity to eat inside the venue, so we went to the supermall next to it. With a full stomach we returned and witnessed the last piece of Varg. It seemed to have been a nice show. Some riffs and females at the stage…

Arkona
The best show of this evening was by Arkona in my opinion. They have some better lights which gives the show definitely something extra.
Maybe caused by the smaller venue, but Arkona dragged you into the concert. The enthusiasm of singer Masha is of course also contagious.

Alestorm
The head-liner of this tour is Alestorm and fortunately I saw only one person with a pirate outfit in the audience. Alestorm is of course well known for their partys when they’re on stage and this also happened this evening. Sing-a-longs and moshpits, Alestorm in a nutshell.

In the nearby venue Turock was an afterparty. Not the least, a lot of bands would come there. You could drink a beer with the guys of Kalmah, Alestorm and Wolfchant, while enjoying some music. Until 8.00 hours, because then the pagantrain went to Eindhoven.
Time to get some sleep.