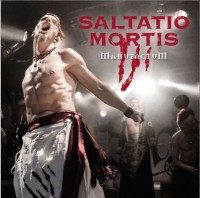 Saltatio Mortis can be named directly with the largest bands in the German folk-rock scene like Subway to Sally and In Extremo. Besides the regular studioalbums they release a live-album called ‘Manufactum’ from time to time. Right now it was time for part 3.
This liveCD was recorded on a Mittelaltermarket in Germany. This means that we get to hear a softer side from Saltatio, since everything is acoustic. However, there isn’t much difference between the acoustic and the ‘normal’ version.
What we get is a nice overview from the career of Saltatio Mortis. A great diversity in the setlist shows us what the band is really capable of. The atmosphere is captured nicely, and the enthusiasm of the band and the fans can be heard really well. Who’s ever been to a concert of Saltatio Mortis knows that vocalist Alea doesn’t have to do much to get the audience to do what he wants, and that’s something that can be heard clearly on this record.
However, it really stands out that the songs sound really good. Well, I know Saltatio Mortis always sounds pretty decent live, but this sounds so perfect and polished that I wonder if they didn’t edit the songs afterwards, or even if I’m just listening to a regular studo-album.
Again a fine release from Saltatio Mortis, though the question rises if it isn’t a bit superfluous. Nice for the fans, but nothing more.