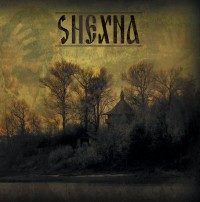 Shexna opens with a psychedelic eerie intro-track, one that could have come straight out of a horror-thriller. This is something I can always appreciate, so with high hopes I enter the album.
From the first second it’s apparent that Shexna isn’t your typical copy-paste folk metal band. The metal parts seem to be inspired by doom and progressive metal, and even influences like Alice in Chains or System of a Down aren’t that far fetched.
Initially the vocals were a bit of a turn-down. It has a unique sound that can be gotten used to after multiple hearings, but it’s pretty monotone and could have used a better production. A welcome change was an occasional grunt, en some seriously psychedelic female vocals.
The folk is a bit hard to find in several songs, and if it’s present, it’s usually not a huge part of the music. This does not make the music any less good to me, all and all the songs are really well written. Not every song is as interesting as the next one, yet every song contains an element they managed to grab your attention.

In my spare time I wouldn’t quickly turn to Shexna, but in certain ways the album opened my eyes a bit further to the original possibilities that folk metal still offers. The sound, like all new things take some getting used to, so don’t put it away if it does not strike you at once, Shexna certainly deserves a chance!