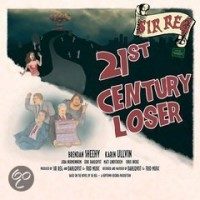 Sir Reg’s competing with bands like Dropkick Murphys and Flogging Molly and what’s even better they releasing a new album called ’21st Century Loser’. Sir Reg had the impossible job to beat their very nice previous album ‘Sign of the Times’ from 2011.
When you start listening to the record you’ll get Emigrate, a nice one, but with some less folk in it. This doesn’t mean there’s no folk in it, but it has some more punk-rock.
But the second one starts with a nice bouzouki intro to burst out in full folk-punk with Raise your Hand. A very nice tight folk-punk song like we know from Sir Reg. And the same goes for the nice fast one ‘Til the Dead Come Alive.
At the End of the World is a slower song as we see them often on these kind of records. A nice one where the Irish accent of Brendan gives it all this nice extra. But halfway it all speeds up and what a fine mess this would make when they play live. Sir Reg tricked us there with this song. But Walking into Doors is the nice easy song you were waiting for. Warm, loving, and a little sad too, Sir Reg shows us the dark side of life here.
But then it’s time to party again, Karin’s fiddle says it all, it’s folk-time again. Sir Reg has this nice criticism on society which is shown in this song again. ‘It’s on the news, we’ve been abused’. This are the nice punk statements we want to hear from these kinds of bands and I can tell you there are lots of them on this record.
Then it’s time for the title-track 21st Century Loser, and they chosen a nice one for the title of this album. Somehow this song is a perfect one to give an idea of this album. Compared to ‘Sign of the Times’ it’s a bit more neat and tidy. The same shows in Live for Today.
City of Tragedy is another slow and little bit dark song. It’s the tale of a desperate man, which is perfectly fitted in the music.
I like the songs like All that Remains more, they’re more catchy with a perfect blend of folk and punk with a nice Irish feeling. It’s almost impossible to sit still with this one. I have so say the album is nicely build up. The songs are definitely not throw simply on the record, but the whole thing is carefully build up. We’ll Rise Again fits perfectly after All that Remains, good job.
Leaves us with 21st Century Loser pt. 2, a nice ending of this album.

Well, a hard one to crack this one. I like ‘Sign of the Times’ better, because it has more of this nice folk-punk songs at which Sir Reg is very good at. But looking at it in an artistic way I have to admit this album is better. The band shows what it’s capable of. The songs are very nice, the compositions are good. The album is quite varied, it has all kind of songs which fit in the Sir Reg’s sound.
But judging it from Folk-metal.nl’s view where we like to keep ‘Folking Out Loud’, I like the previous one somewhat more. But the fact remains this is a very very good album by Sir Reg’s, and they immediately made me curious about their next one. In which direction they shall go…