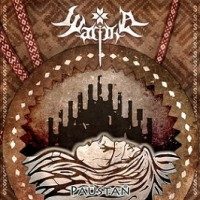 After a demo in 2009 and a single in 2011 it’s finally time for Wartha to release a full length. This début-album is entitled ‘Paŭstań’ and contains no less than 11 tracks.
Wartha has quite an unique style with their harsh screams and clean female vocals. Their style of folk-metal is somewhat blackened.
The album starts with the intro Hukańnie, with whispers and minimal music, it sounds a bit folky right from the start.
The second track Našy Ziemli is a bit faster and has this typical style of Wartha. It reminds the most of Kivimetsän Druidi, but it seems the woods in the world of this Druid suffered from a great fire, and out of this woods came Wartha. They sound a bit like blackened Kivimetsän Druidi.
The only thing which bothers me a bit on this album are the keys at some points. For instance in Śviet. Where the music forms this beautiful playground where the screams and the clean vocals can play on in perfect harmony. The keys are somewhat to much in the spotlights with a typical sound which can be immediately recognized as keys, less nice.
The somewhat classical vocals form this nice contrast with the harsh screams and the music is nicely composed. There are enough changes to make it all very pleasant to listen to.
There’s one other thing which bothers me. When I look at their line-up I don’t see a female singer anymore. But the strength of Wartha lies in the combination of these two voices. So I sincerely hope this is a vacant position in the band which will soon be filled. But I would like it even more if they could keep this nice voice in the band.
Paŭstań ends with the Immortal cover Błašyrk which is a bit different, but fits perfectly into their sound.

Wartha has made a very nice début with Paŭstań, some improvements can be made in the keys, but they have a nice sound and a perfect combination of voices. A very pleasant album to listen to.
When you like a band like Kivimetsän Druidi, Wartha is a blackened version of this.