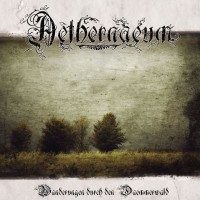 Aethernaeum is the name of the project which was founded by Alexander Paul Blake. While he released his first work, ‘Die Rückkehr ins Goldene Zeitalter’under his own name, he decided to release this album as a project, so people would focus more on the music than on the person behind it.
And that’s exactly what we’re going to; focus on the music. Aethernaeum brings us so called ‘Nature Mystic Folk Black Metal’, and while this sounds ambitious, it quite covers the music. Raw, pure black-metal interchanged with atmospheric, sometimes acoustic passages is what you get. To complete the music, a violin and cello are added.
These instruments are immediately one of the strongest aspect of the record. The classical instruments not only complete, but they also provide a nice contrast with the music. For example ‘Auf den Nebelfeldern’ shows us that brutal black-metal can match perfectly with a beautiful, almost melancholic violinpart.
Furthermore, this album is an album of many contrasts. Not only vocally, where choirs, raw black metal vocals and whispers are used, but also in a musical way. Acoustic pieces are effortlessly interchanged with black metal and the other way around, amazing!
Aethernaeum released an exciting record with ‘Wanderungen durch den daemmerwald’. Due to the many contrasts within the coherent whole, it stays pleasurable and interesting to listen to. The raw and harsh black metal is easily interchanged with atmospheric, melodic passages, and that’s precisely what makes this release a very strong one. Definitely worth checking out!