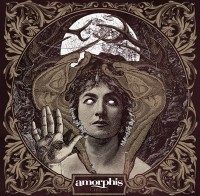 What is there to say about Amorphis? These musical jack-of-all-trades already have 2 EPs and 2 DVDs on their name and with Circle they’ve reached their 12th album. Amorphis is know for their epic guitars, violent grunts, keyboard and the amazing clean vocals. These men can do anything they want with their music and with every album they give a whole deferent sphere, but yet you hear Amorphis every time, though it’s never the same.
Guitars and grunt, an unexpected start for an Amorphis album which usually starts with a long and balanced keyboard intro.
Shades of Gray opens the album a smashing way, this sets the tone for the entire record. Just like all the Amorphis albums, Circle tells a story of its own. This story tells about an unfortunate man who was invited to a circle and received the strength of the old Finnish gods. Because this entire story takes place between dusk and dawn, Amorphis chose to make this album darker and heavier than the last ones. For everyone who wonders why there is more grunts and a more prominent role for the guitars, here’s the answer. The effect of this decision is as well that Circle is an album you’ll have to give some time to get used to it, while Beginning of Times was catchy and got you from the very first time. Circle is musically at least as good, but each and every song has to grow on you.
The second song is Mission, it starts really catchy, and after a few times you’ll definitely be able to sing along with this one. But it’s not a big sing-along song like Mermaid for example.
The next song in this 46 minutes long tale is The Wanderer, again a very good song, but personally I had to get used to this high vocals Tomi uses here. As well in this song the vocal seems to stand behind the guitars, it’s a bit different, but you’ll notice that there guys really thought about all this.
Now it’s time to tremble out the floor of each and every musichall Amorphis will play soon, and where you definitely have to be! Narrowpath is the most cheerful song on this record, it’ll be easy to sing along with this one and you’ll find it the most catchy song on Circle.
I’ll just skip a part now so I can tell you about the song I like most on this album, Nightbird’s Song. the first part is a piece of weird blackmetal alike grunt which I still can’t get used to, but after all the destroying dark violence we get to an amazing part with Tomi’s wonderful clear vocals.
ARISE! THE SILENT WARRIORS ARISE!
Then we fall into a relaxing part of beautiful keyboards, to return to the darkness. This all is flows into the other so smoothly, this shows the great musical abilities of these guys, that’s just amazing!
Into the Abyss starts like we’re used to from the older Amorphis work, another great piece of keyboard that builds up to the rest of the song, drums catch onto the tune and then it all kicks off.
I think this song is most alike the older work, so this song might be some way for Amorphis to bridge the gap between this and the older albums. It happens all so unobtrusive and subtle, everything just suits everything else, every album is typically Amorphis but still it’s very different from each other.
The last song Amorphis brings us is A New Day, a song with many acoustic parts. Where you find yourself in a dark night during the album, you just feel the sunrise in this song. It’s amazing that you’re able to make people feel like that, just by music! Goose pockets during this song, what a grand final!

I think it speaks for itself that when Amorphis makes a new album, this is always from a special quality! This one is definitely a great candidate for the best release of 2013! I really can’t wait to see those guys live again this year, even more with all those new masterpieces added on the set-list! You should all be sure to get this album! And shirts, and concerttickets and whatever there is to be sold with Amorphis’ name on it.