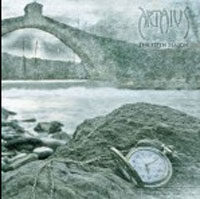 The title of this album ‘The fifth Season’ may trick you but this is in fact the debut-album of the progressive Folk-metal band Artaius. The three songs of their 2011 demo come back at this albums, but there’s more.
The first song ‘Make the Iguana’ is a nice one to start with. Eluveitie doesn’t own the exclusive right on Celtic tunes and when you think ‘this is stolen’, it’s simply a Celtic tune used in a entirely different song, which isn’t like Eluveitie or any other band at all.
And the second track ‘Through the Gates of Time’ is again a song which makes you wonder what you’re listening to. The female voices remind of Gothic metal bands like Within Temptation a bit. But the flutes sing nice folktunes and the raw male voice give it a much heavier feel. A very nice blend of styles this is.
‘Over the Edge’ reminds a bit of bands like Fenrir at first, but this one is changing in jazzy piece. Weird stuff, but it’s get’s me excited. Usually I’m not fond of keyboards, it’s often sounds fake to me. But Artaius uses them in another way, like piano-like in this track or with a typical sound which could only be produced by a keyboard an that’s nice.
In ‘Horizon’ for instance, the keys are very prominent in the intro, but you can hear clearly it are keys and this is an ever so nice progressive intro. Quite futuristic but followed by traditional flute, daring, but brilliant. Solid guitars and male singing put the finishing touch to the song. Indescribable but very nice.
‘Starway’s End’ is one form the demo again, but don’t think they put the original song on this album as well. The track is completely worked over and has a much heavier feel, but the spirit of the first version is still there. What an progress did the band make here…
Prophecy is again this nice mix of futuristic keys, traditional flutes, solid guitars, clear female and raw male vocals which make this unique Artaius sound.
After all these songs with English lyrics we get ‘La vergine e il lupo’ (Virgin and the Wolf), with Italian lyrics. And they can do this as well. It’s sounds just as nice as in English. The high fragile flutes together with the harsh male vocals sound brilliant!
After this the weather seems to change and we get a lot of wind. Starting with ‘Wind of Truth’ the third one of their demo, but this one isn’t changed much an it shouldn’t be, it’s nice at it is.
It’s followed by ‘Wind of Quest’ and ‘Winds’of Revenge’ where the violin has a prominent role for the first time.
And the weather calms down with the nice and quiet track ‘Winds of Wisdom’, with acoustic guitar pieces. A very nice finishing touch for this album.

Artaius has made a very nice album with ‘The Fifth Season’. The songs are of very good quality the band has improved a lot and shows it has learned a lot from their demo. The music is very nice with this combination of styles from folk to jazz, Gothic and metal. They manage to get to me with keyboards, something I usually aren’t very fond of. But this futuristic sounds in combination with traditional flutes and the somewhat classical female voices is great.
This is undoubtedly a strong piece of work, but above all I think their sound is quite unique, very bold to try something unusual as this and make something beautiful out of it!