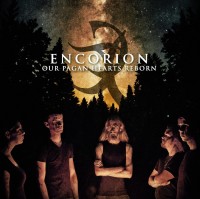 It’s been a while since Encorion gave us an album, fortunately that’s about to change now. In 2010 Facing History and Ourselves was released, somewhat later I was allowed to write a review. Now the time has come that Encorion throws Our Pagan Hearts Reborn on my desk, thank you guys. My last review I finished up by telling you to keep an eye out for this guys.
I can only hope you did, because it was a good advice.

Just like the previous album, we kick off with a beautiful intro, a little bit “mainstream” pagan maybe, but still I personally like it to get the vibe of the album.
“Our pagan! Our pagan hearts!
Our Pagan Hearts Reborn is the opener, and it immediately gives us a load of guitar noise but again with this amazing violin parts. I already said it in the previous review, but it’s even better now, the violin from Encorion comes straight out of Valhalla. Encorion has (as well as some other bands lately) decided to use more heroic clean vocals, next to the grunts. I can say it’s a really catchy opening, Encorion like we’re used to, just 1000 times better. I feel more and more for this job.
Fire of Freedom, the title sounds somewhat cliché, though it’s an amazing piece of Paganmetal from our own soil! The violin is alternating with the flutes, which is a great extension to this song.
Filled with happiness, we go on to the next song which is called Moonfall, Sunrise.
Acoustic guitars and a flute make an jolly folky intermezzo that as well forms an wonderful intro for the best part of the album.
I don’t even have to tell you what makes the song Spirit, We are one so amazing, because you’ve all looked it up on youtube and seen the clip too. If not, do it, even before finishing reading this.
When everyone is done swinging their hair around, it’s time for the next song, Farewell to the Living. At first there’s calm, but when the guitars breakout, the tempo stays calm, this brings an amazing sphere in the song. It gives more space to the lovely lyrics which Encorion brings you.
“Farewell to the living! The journey to Valhalla has begun!”
Fate’s Illusion, another acoustic song, it starts like on of these nice folk-tunes, but it reveals itself to be an amazing piece of classical music. Wauw, what a talent that you can make something like this as well! This shows that Encorion is allround very musical! You can’t do anything with this song, than love it ‘till the last second!
The song is followed up by almost 5 minutes violence and war, We will Rise. Yes Encorion, with an album like this, you will!
With Buried in our Lands this musical masterpiece comes to an end. This song sounds most like the previous record of them. Personally I think it’s a very good thing that in a time of 10.000 paganmetal bands, Encorion manages to create an own and unique sound which you immediately recognize as Encorion.

A last compliment to the guys, just like Facing History and Ourselves, you did a great job with the Artwork. A very unique CD-cover once again, it just breathes the style of this people.

Unfortunately after almost 50 minutes, the CD comes to an end, and I there’s only one thing left to do for me. I must conclude that Encorion has risen above themselves. Dear readers, My Pagan Heart is Reborn! Sometimes out of many many albums of unknown bands, one stands out and makes clear to me why I’m such an paganmetal fan, this record shows me! Make sure you get this album in your CDbox, so you can hear what I mean!