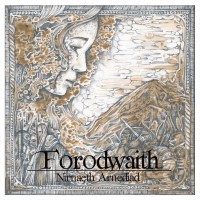 Melodic Death with Folk, inspired by Tolkien. Interesting combination while most of the ‘Tolkienbands’ are rather epic and I’m curious how this works in combination with Death Metal.
Forodwaith is a starting band from Belarus and there isn’t a lot information to be found about them.
This doesn’t mean their first album ‘Nirnaeth Ardediad’ entitled (named after a battle from ‘The Silmarillion’ by Tolkien) is a poor produced album. On the contrary!
This debut-album will be re-released on the Sound Age label with new artwork.

This album contains 10 solid tracks which seem to come from a band who’s been on the road for several years.
After an intro which build things up we come to the title-track, which starts deliciously melodic and picks op speed with a double bass. This is also the longest track of this album. With almost 8 minutes, with low grunts and hight screams which is building up in the first five minutes. After a sing-a-long piece and an intermezzo they rock on with to finally fade out.
After this is ‘Morgoth’ which is somewhat more solid and darker, then on to ‘Stone Guardian’.
‘Saga’ is a somewhat more down-tempo song and this brings some rest, to be drawn into the next song ‘Death and Beer’ with a kind of bagpipe sound.
‘The white tower’ brings us back from happiness to more serious issues and contains a number of guitar-solo’s.
Forodwaith seems tireless, they keep on banging.
My favourite track from this album is ‘Horn of Gondor’, again a song in which they rage on as madmen. It has a fabulous intro.
‘Revenge of Mjolnir’ is somewhat more folk caused by the bagpipe and as a finishing touch we have the last slow track ‘Valhalla Feast’. And then this album is over.