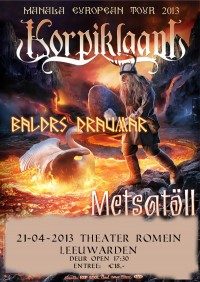 Baldrs Draumar
Baldrs Draumar had the honor of opening tonights show and they did a really good job! Besides songs from Forfedres Fortellingen and older songs from the demo’s, they played also two songs from the upcoming album Aldgillissoan. With Wolvetiid and Yn’e Meahall, the guys show that they have grown with their music, less folk, more metal. De music fits with the theme of the upcoming album. With Aldgillissoan, Baldr Draumar goes back to the Frisian roots, back to the time of King Redbad. Tonight they gave a strong performance and proved again that they are talented and deserve to support the big names. It’s just waiting for the moment they will be the headliner.

Metsatöll
After this Frisian party, it was time for Metsatöll. I had never seen these Estonians before so I was really curious for their show. And it was solid like a rock! Metsatoll has a very own and unique style, which not everybody likes. But I do and tonights show was powerfull with moments of sjamanistic sounds. Even though you know the songs, still singing along is hard due to the Estonian lyrics. Well, that didn’t matter for the audience, it was enthousiastic. Especially after Markus spoke some dutch words to announce the upcoming song and it was actually not that bad. More famous songs like Vaid Vaprust and Kuu were played, together with more unknown work. The most special moment was around the end of the show. For minutes there was nothing more than some oioioi (just imagine a shamanistic atmosphere) and some whispering. It may sound boring but it wasn’t like that at all. The audience stayed interested and continued clapping. Unfortunately the song did not really explode, otherwise the audience would have gone crazy. But the best show of tonight was definitely Metsatöll’s.

Korpiklaani
Headliner of the evening was Korpiklaani. The past few months, the shows of these finnish men were a bit disapointing. The band refused to play the famous drinking songs, no matter how hard the audience asked for it. And besides that, it also seemed that the band did no longer enjoy to play. Maybe because my expectations were not that good, I was surprised to enjoy a good show. For a while already, the band has a new violinplayer, who is really good, and a new accordion player. The previous one announced that he actually did not enjoy playing in front of an audience at all. Fortunately, the new one does not seem to have that problem at all. A few moments the show was still a one-man show of vocalist Jonne but this time they listened to the audience and besides songs from the latest album Manala, also Vodka, Metsamies and Beer Beer were played. The audience had the chance to go crazy and that’s what they did. Korpiklaani seems to have fun in playing again and hopefully they will continue doing so.