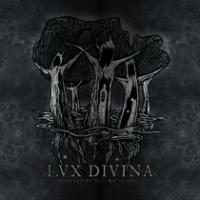 “Nature-Driven Black Metal”. And here it goes again, was my initial thought, a bunch of idiots who thought it was necessary to come up with a new subgenre for their ‘special’ kind of metal. However, this wasn’t a reason for me to completely ignore this record, though it became clear rather soon that this was typical pagan-black music.
Lux Divina is a Spanish band which were founded in 1998. That means they exist pretty long, but they haven’t released much in the time being. Just 1 full-length, a few demo’s and a few compilations is what this band released on the world.
What we get is mid- to up-tempo blackmetal, where the clean vocals are interchanged with typical black-metal screams. What strikes the most about the vocals is that the clean ones sound really similar to those of Primordial, though they sound a little bit more forced.
A more gentle piece seems to arise when the acoustic intro of ‘Fagus Sylvatica’ starts, which sounds really similar to bands like Les Discret or Alcest. While the beginning is calm and gentle, about halfway through the song all hell breaks loose, which results in one of the most brutal pieces of this record. ‘Ode to December’ is a whole different story, and is completely out of place. The song starts with a hurdy-gurdy, and is therefore the only song where a traditional instrument is used. A nice song, but it doesn’t really fit on this CD.
Lux Divina doesn’t disappoint with this record. It all sounds pretty catchy, though never it becomes really special. Pretty ok to listen to it once in a while.