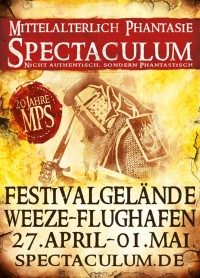 After a drive to airport Weeze in Germany, you leave your car and modern life behind at the parking lot and walk into medieval times. When you enter the are, you can see the campfire burning, watch the knights, craftsmen and the beautiful ladies dressed in nice royalty dresses or in simple but just as beautiful simple civilian clothes. You hear ‘Die Streuner’ with their fiddles and lutes and smell the fresh baked bread. All your senses are drowned in medieval times. When you turn around you can see your car at the parking lot, but modern times seem far away suddenly.

The MPS season has started again. Whole summer long almost every weekend this medieval caravan stops somewhere in Germany to fill quite a large area with medieval people, food, music, and drinks. You can watch knights fighting, but also shoot arrows yourself, stroll along a lot of stalls with medieval clothes, belts, swords, you name it. There are a few small podia at witch magicians show their art, jugglers entertain people there’s a medieval puppet theatre for the kids as well. There are three larger stages where bands like Die Streuner, Vroudenspil, Duivelspack and other show their skills. One thing they all have in common, the people in the middle ages must have laughed a lot, because everything contains a hight dose of humour.

Saltatio Mortis
A very nice thing is on most stages are two band performing alternately. On this Saturday Vroudenspil and the medieval rock band Saltatio Mortis do this at the main stage. So we skip the evening concert, but we see all three other concerts of SaMo. And what a treat this is. They’re playing their medieval show as we know it from the Manufactum albums. No guitars, but most of the time three of four bagpipes and all kind of other nice old instruments. Highly energetic performance and the medieval beats don’t miss effect on the audience. Soon everybody is moving along at these nice beats. Try standing still at songs like Douce Dame Jolie…
And they’re skilled too. One of the moments they show this is in the contest of Lutzi on bagpipes and Jean Mėchant at the drums. Lutzi is playing a solo piece ‘assisted’ by Jean Mėchant, the last one is doing a marvellous job at changing the beat, but Lutzi plays on unrelenting. Very entertaining!
They playing different songs in all these shows, so you’re getting entertained to the max!

Saor Patrol
At the smallest stage, we get to see Saor Patrol, tomorrow they will be alternating with the Dutch folkband Rapalje, but today they’re the only musician at this stage.
The Scottish musician were doing a great job again this time. The unique music of these guys is at it’s best live where the drums shake you belly and the bagpipe makes your spine shiver. They’re playing with a lot of fun again this time. But the MPS almost feels at home for these guys and not only while they’re playing there for a few years now. No, Saor Patrol excistance is intertwined with the middle ages. The band was founded to collect money for the Duncarron project. This project is all about building a medieval village in Scotland and you can read more about it at www.duncarron.com.

After a while you get hungry of all this nice stuff and you can go to one of the many stands where you can have a nice beer, of course they have also very special old brands here. Or you can get some mead, you can but a whole bottle at one of the stands as well for later. Grab a nice hemp pancake of a perfectly grilled spear with meat, or salmon or ‘knobibrot’ but you have too make sure your partners does the last one as well, because there’s a little garlic in it….

Omnia
In the evening we get to see the concert of the Dutch band Omnia which is only doing an evening concert at the MPS.
In the meanwhile it has become very cold and looking at the band preparing the stage doesn’t get us warmer, but when they start to play the cold disappears. For almost 90 minutes the band is warming us with beautiful songs. Steve is playing several flutes for us this evening. A very special moment when Steve sings ‘Take these wings and learn to fly man’ and behind us in the twilight a big planes seeks for the stars. One of Steve’s new flutes is used in the new song ‘Hoka Hey’ . A song in which the audience get the opportunity to sing-a-long when Omnia is playing this for the second time when the audience draws them back to the stage for a second encore.

When they stop and walk back to our car, we notice how cold modern times are. And that why we will return to the MPS for sure.