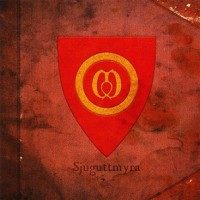 Seven years. 7 years it took for Lars Jensen to finish some new work for his project Myrkgrav. Who thinks the waiting is rewarded by a full release is misleaded, because ‘Sjuguttmyra’ is an EP solely there to make people curious for the full-length album which will be released soon.
And that definitely worked! Myrkgrav is a one-manband, which means that Lars Jensen composed everything and played all the instruments by himself. While he had some help from session-musicians, this still is quite a performance.
On this EP are 4 tracks, of which 2 are new and 2 are new versions of older songs. While it’s been 7 years between the old and the new songs, it all sounds like a whole. A whole that sounds really good.
Because the music is really good! Mid-tempo folk-metal, which has a lot of resemblances with Tyr. The lead-roles are played by the guitar and the melodic clean vocals, though grunts are also used. While the tempo is actually pretty low, sometimes the speed is drastically increased, as can be heared with ‘Uttjent’. At this song, Myrkgrav shows their black-metal side, and it sounds a bit like Enslaved.
All in all a pretty nice EP, but did we really have to wait 7 years for this? While I’m really curious for the whole album, I can recommend people to just wait a little bit longer for the full release.