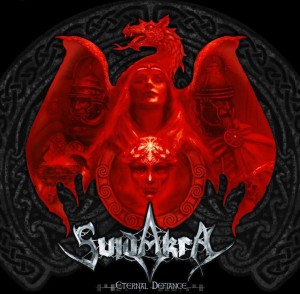 I still can’t really get why a band who’s in the celtic/pagan metal scene for years never really achieved the big name they deserve.
This might perhaps be Suidakra’s own Eternal Defiance, in the last 11 years Suidakra has produced 11 albums, and proud they may present to us their 12th masterpiece.
Suidakra has played on every big festival and have even been doing overseas tours, so you might say they’ve accomplished quite a lot already. But for some reason these Germans don’t always get fully appreciated, but I can only say one thing about it;
They’re storming the walls!

What an mighty intro this is, it’s actually exactly what I’d expect from Suidakra. Close your eyes and you’ll see a legion march in front of you, a short stop was made to cut off some faces from our foes and then, guitar violence. Mighty and pride the legion marches on, even more powerful, more fearsome, BOOM!
Inner Sanctum, how much better can you start your CD than this? It’s just the intro flowing into this song. You can hear how the story goes on, “10.000 strong, they storm the walls!”
Give me thousand German bands in our genre and I immediately know which on is Suidakra, they have such an own sound, easy to catch on with. It’s very simple to listen to and like this, everyone may just like this, but never the less it’s still raw and violent. This album brings you Suidakra, but even better than last time!
Who of you is known with the older Suidakra songs? In that case you couldn’t have missed the voice of a goddess which belongs to Tina… and yes, more songs with her singing along! How much better is this album going to get?
March of the Conquest, the best song if you’d ask me, it just contains everything that you could possibly expect from this musicians. A catchy tune, enough violence, enough grunts, the amazing female vocals, and at last the background role for the bagpipes which is really characteristic for Suidakra, WOW!

I’ll jump to The Mindsong, are you familiar with Birog’s Oath from the previous album? This beautiful song is written in the same spheres. Yes Tina, we will love you beyond your dreams, even though none of us is an Roman Emperor. The song has an amazing structure which holds you tight until the end and makes you delight every second.
Fast we clatter in the Rage for Revenge, the total opposite of the last song, a major load of guitar violence and Arkadius’ brutal vocals. But as always, Suidakra mixes several genres like black, power, melodic in their songs, and in this one, all these aspects are inter-weaved so perfectly.
Defiant Dreams forms an amazing ending to the first song Inner Sanctum. In the end of the song we here some very glorious and bombastic sounds which finish the album wonderful…

… no it doesn’t, Suidakra made us a desert, Damnatio Memoriae. It’s easy to understand they put this song as last. This acoustic song wouldn’t have fitted in between the other songs, but it makes such an amazing masterpiece to end this record with. You better enjoy this as much as you could, and again, and again, I really can’t get enough of this album!

Buy it! Buy it! Buy it now! T-shirts, concert tickets, but above all you should make sure to get this incredible masterpiece. I don’t say this very easly, even after having reviewed a lot of good albums, but this is the best album I’ve heard since the last Moonsorrow album!