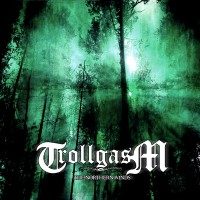 With a name like Trollgasm you expect some strange troll-alike music. A genre you can’t deny any more now a days, there just are so much bands making this. The album is called “The Northern Winds” it sounds quite cliché and you’ll expect to hear something you’ve heard many times before.
You can say whatever you want, but these Australians will at least live up to your expectations.

The albums sets off with a song called Hunting Trolls, and it starts quite good. A very common intro, but for some reason I get curious, the intro is build up greatly with the guitars and drums falling in. Then the song should break its chains, but for some reason it feels like they keep down a bit. The vocals are quite okay, at least you can understand what he’s saying. But maybe this might be the only band for which that’s not a good thing, the lyrics are simple and have not much deepening or refreshment.
The next song is Ride, I hear some violins, again I get curious. The mastering of it all is quite acceptable and the violins are a great extension. But still it all sounds very common and there’s not much that I haven’t heard before.
The third song is Heineken, you’re not scoring points with this. Except for the fact that Heineken tastes terrible, the song isn’t renewing as well. The violin remains the very best part of the music. I must make clear to you, it’s not that it’s all bad or something, it just isn’t good as well, this is one out of the gods may know how many albums that just don’t bring is something new.
God of Thunder might be even a bit worse, you can just imagine what this would sound like, and it’s exactly that!

Just before this CD comes to an end, we as well get “Humppa Humppa”, it reminds me of Jaktens Tid… but far less catchy, still it’s more cheerful than the previous songs.
The Northern Winds, title-track and last song on the record. It’s an acoustic song with female vocals that make me very happy. I have no clue where she has been all the album long, but this makes it a lot more comfortable to listen to. Then when this song finishes, I actually felt a bit sad that this one didn’t last longer. I just wished the rest of the album could’ve reached this level.

In the end I’ll have to conclude that this is just a CD, nothing very bad, but neither good nor extraordinary. It’s good to hear there’s folk related metal Down Under as well, but I think I’ll just wait for some Aboriginals with didgeridoo’s. This kind of “trollmetal” is made more than just enough, and even if you decide to make it, you should make sure you’re different from the rest. The violins is a good start, but they aren’t there yet.