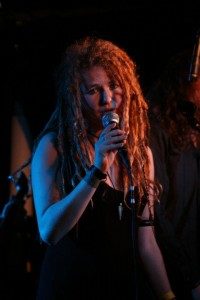 All beer is gone. At least according to Viatora’s motto ‘we won’t stop until the beer is op’ (we won’t stop until all beer is gone). Thus all good things end, just like the career of band Viatora, originating from Limburg. To celebrate their goodbye, a special concert was arranged in the Little Devil in Tilburg, together with the bands Shade of Hatred and Roots Residue.
At the start of the gig, there was one thing that struck me the most; the stage was way to empty. Just a guitarist, a drummer a bassist and a female vocalist were there. And that’s quite a difference from the seven we’re used to! The first song that was played sounded really ‘empty’. Luckily this changed with the second song, when ex-members Thijs (flutes, vocals) and Kim (violin) joined the stage. All songs from their demo were played, which the audience seemingly enjoyed. The band was really enthusiastic, and tried to put the most out of their last time on stage. They did a great job, though some mistakes could be heard. Also the sound wasn’t perfect throughout the performance. However, this didn’t make it less enjoyable, and I can say sincerely from the bottom of my heart that it’s regrettable that Viatora quits.