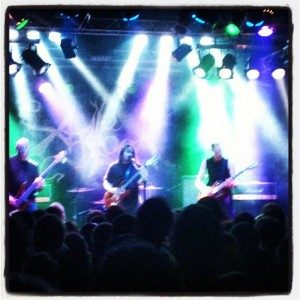 The only Agalloch and Fen show in the Netherlands this year and this in Arnhem. Willemeen is the stage where it’s all happening and the show is sold out for months! This promises a lot!

When we arrive at Willemeen there’s a huge crowd waiting for the doors to open at 18:00 hours, but we have to wait for over half an hour to see some movements in this row. Willemeen is a nice venue but bot when it’s sold out. To get to the wardrobe you have to cross the hall and in the middle of the hall is a little exaltation which is the cause you look against the back of the people in front of you even if you are of average length.

Once we were inside with a pint of beer in our hands Fen was already started. And what an enthusiasm these guys showed, fine show!
The played some of the new stuff of their recent record, but also some older tracks. Despite the fact the venue was filled up I thought the audience reaction was a little lean. Are all people here for Agalloch? Or was it the fact it was on a Sunday?

After some changes on stage the smell of incense went through the hall. Delicious, not only eyes and ears are treated but our noses were stimulated positively as well. After a nice intro Agalloch starts with ‘Limbs’ and that’s nice. The atmosphere is fine, although the band is a little restrained at stage. But on the other hand they’re going to play a 120 minutes show, so an easy start isn’t a bad thing.

You can read below which songs they played, but the best one in my opinion was ‘Faustian Echoes’ which filled the air in the hall for over 20 minutes. Despite the fact Agalloch is a very nice band to listen to, I was glad not everything sounded as their records. This gave the songs a nice different spin, a bit rougher and a bit unpredictable.

With ‘Kneel to the Cross’ there would have come an end to the set, but but also Agalloch is fallen for the bad act, where you pretend to stop, fortunately there were two more tracks to come.

All in all:
Music: top and at a high level, very nice!
Band: Fen was enthusiastic, Agalloch a bit less convincing on stage.
Venue: to crowded.
Audience: Very quiet, few headbanging people but the rest was enjoying it quietly.

Limbs
Ghost Of The Midwinter Fires
Falling Snow
Faustian Echoes
The Melancholy Spirit
You Were But A Ghost In My Arms
In The Shadow Of Our Pale Companion
Kneel To The Cross
Of Stone, Wind and Pillor
Our Fortress Is Burning