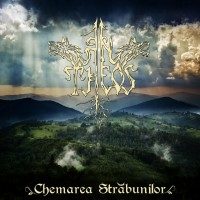 An Theos may be a relatively young band, but this can’t be heard when you listen to their single. Chemarea străbunilor is the name of this début of this Romanian band.
Making music with 8 people can become a great mess if you don’t know what you’re doing, but it’s obvious these folk know what they’re doing. The intro of Chemarea străbunilor is breathtaking and has this typical Romanian style but not of the typical folk-dance kind we usually hear. It’s a bit more the skilled gypsy style we sometimes hear over here. But when the harsh male metalvocals and guitars enter it’s obvious it’s folk-metal we get. A nice style of An Theos, I can’t think of another band which uses this approach. Very nice track in which we get to hear of lot of instruments but on top of the metal-layer the sound remains clean and every authentic instrument can be heard.
Bratul de fier starts in a nice metal-way with guitars, the keys are a bit of track in this song. I would have preferred a less important role for them regarding the nice authentic equipment they have. A very decent track which sounds totally different, which proves the band is able to compose very different songs and still keep their own sound.
In Semintia daca we get a very nice small Balkan folk piece, but again a bit annoying keys. But the composition of this track is nice again, with a lot of nice changes. The track is quite long, but because of the alternations it never becomes dull.

In short a beautiful single by An Theos. The keys are the flaw in their sound, otherwise the whole album would have been nicer. But still Bratul de Fier and Semintia Daca are nice tracks. Chemarea străbunilor is the main track of this single and this is a real beauty, it certainly goes in my play-list of ‘favourites’. Very nice use of traditional music and instruments and my compliment for this unique style. They’ve managed to get a sound of their own. I hope we get a full length of them soon.