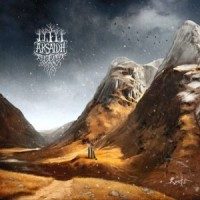 Sometimes you have these albums which can drag you away to another World. A mysterious world where you can dream away, taken away from reality. An album that grasps you from the first second onwards, never to let go. An album that you can listen to for many times, discovering new elements each time you listen to it. An album like Roots.
Just 4 songs are on this record, and besides one of them they’re all longer than 10 minutes. Long drawn out, atmospheric masterpieces which are so vivacious that you can completely lose yourself while listening. From raw blackmetal to almost neofolkish, acoustic passages, everything is succeeded perfectly after each other without effort. So much emotion, as much in the harsh as well as in the quieter parts, I’ve rarely seen before.
Atmosphere is the most import on this record, but the music is more than fine as well. A whole scale of traditional instruments like flutes and violin form the melodic base on an already really melodic foundation of electric and acoustic guitar, raw vocals and drums.
Everyone who loves to drift away listening to music, or who loves atmospheric black-metal in general, I can recommend to listen to this CD immediately. That this is just their debut is a wonder, since I sincerely ask myself if this ever can be topped. Already one of the best releases from 2013!