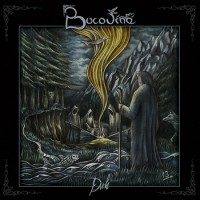 Not a very productive band the Romanian Folk-metal band Bucovina. With an Full length after six years of existence in 2006 and an EP in 2010. Ans now there’s a single in 2013. Unfortunately this single has only one song ‘Day follows Day, Night follows Night’ You can listen to it on their bandcamp. This not very much for a review. You can expect pretty much the same as on their EP ‘Duh’, it could have been one of the tracks of that album.
But who cares if the quality is right? So, we give this EP ‘Duh’ a closer examination.
The spring roars in ‘Vuiet de Negru Izvor’ and you can hear the plants sprout and the nature come to live in this instrumental track.
But also spirits come to live in ‘Duh’. The lyrics are rather short, but they tell us about a ghost. The music is very nice. The keys aren’t not always a nice add, but the rest is nice. Clean guitar-pieces and clean vocals, make this typical music from the Balkan-region.
In ‘Straja’ they sings about their land and nature, and you can hear they’re proud of it, you don’t have to understand Romanian for that.
In ‘ Mestecăniş’ the guitars join in this proud song for their native land. Although Bucovina doesn’t make very unique music, it’s all quite nice to listen to. What makes them different from other folk-metalband from this region is they don’t have the typical Slavic female voices.
Their name is taken from the Romanian town Bucovina, and they love it, as they show in this song as well ‘ Bucovina, Inima Mea’ (Bucovina, my Heart), which is a very nice acoustic and instrumental one.

Bucovina expresses their love for Bucovina on this album ‘Duh’ and they might not be very productive, the quality of what they make is very high. I personally would have liked some more typical Romanian folk in their music, but is music full of love for Bucovina and when you listen to it, you can only fall in love with this area as well.