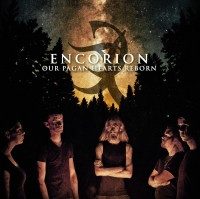 After I’d written a very positive review about Encorion from Rotterdam it’s time to visit the official releaseparty of these men and lady.
They haven’t posted much about the gig and the location was a little bit odd as well, it was at a garage.
Once I got to Rotterdam we had to search for a while but than we found the garage. We hadn’t even got our jackets in the cloakroom when Jark, the drummer, enthusiastically received us. Once we got upstairs we find ourselves in a small room that would normally be the canteen where they’ve set up a stage.
Immediately vocalist Raymond welcomed us and we start a chat with the sympathetic men. Of course we get ourselves some merchandise and talk with some more people before we can start the real work.
On two screens on both sides of the stage we all watch the new clip “Spirits, We are One”, unless a small technical problem with the tv’s this was a good start.
Than of course we get to the part where everyone came for, the gig itself.
For the people who still haven’t listened or ordered the CD, you’d better do so!
“Our Pagan Hearts Reborn” is the first song of the new record and the opener for tonight. Fortunately we can go crazy out here. Sadly enough Danny had trouble with his guitar, making the intro a lot longer, but still he gets a bit stressed which caused him to make a lot of mistakes in the first song. Luckily enough we gets back in line during the second song, Fire of Freedom. The third song is an acoustic one, they have to re-arrange some stuff on the stage and that reveals the weakest part of their performance. Raymond had some trouble with talking the songs to a whole. In such a re-arrangement it all looks like a bit of lost time, and with some more talking it would all be smoother. After the gig the bassplayer told us they hadn’t played a gig for months and they had to get more into it again. “Moonfall, Sunrise” the amazing acoustic intro in front of “Spirit, we are one”. Danny and Michael on the acoustic guitars and Tessa on the whistle it still isn’t complete. Encorion made sure that they had a special guestmusician, Tim, playing the bodhran in this song. After this musical intermezzo it’s time to go all out on “Spirit, we are one”. Just wave your hair and listen to everything this band gives us. As well in this song a short guest appereance from Mitch (singer from the lifted band Vanir).
Tessa plays amazing the entire gig and especially with a violin that’s really important! As well the other guys are playing great. Unless it’s a small, improvised room the sound is really good. So all credit to Encorions personal soundman.
As well with “Farewell to the Living” the sphere is getting better and better. This was quite hard because there where just 50 people and a big part of them looked like parents or family of the band to me.
“Fate’s Illusion” is performed perfectly by Tessa on her own. What a lovely song this is, I really enjoy every moment of this song. A sweet intermezzo which isn’t even folk anymore, this is real classic music, wonderful!
With “We will Rise” and “ Burried in our Lands” they’ve played the entire new album. Though this isn’t enough for these guys, oh no, they just continue with one of their older songs, “Raging Storms”.
After this it was time for a Dutch real Encorion version for “What shall we do with the drunken sailor” called “Dronken Zeeman”.
Than the last part they played was some song guessing. Three known songs where mixed into one unique medley. They played parts of Pirates of the Caribean, Ghost Riders in the Sky from Johny Cash and the theme from the hitserie Game of Thrones. After this the gig came (unfortunately) to an end. After quite a long set of great music, it was time to chat a bit more while enjoying a drink. We had the opportunity to talk with the man and women from Encorion, they’re such a sympathetic folk!
Yes, I can honestly say it was a great evening!
Score: 8/10