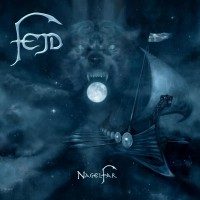 In my opinion is Fejd one of the few bands within the folk-metalgenre which still has an unique sound. A sound no other band ever copied, let alone excel. For people who haven’t heard of the Swedish Fejd before, and would like to know what’s so special about is, a short explanation. Fejd makes really atmospheric folk-metal, but without using electric guitars. Can this be? Yes, it can, and Fejd does this to the utmost perfection. With Nagelfar these fife release their third album. An important album, because will they be capable to maintain their geniality of the previous two releases?
The answer has two sides. Yes, Fejd still knows how to create genius compositions with their unusual combo of traditional instruments like the moraharpa, hurdy-gurdy, bouzouki and more, together with the more usual instruments like bass and drum. However, this album is more of the same. With that, it’s a logical continuation on the predecessor Eifur, and maybe that’s the real problem of this album.
This album is too much like we’ve heard before. It’s good, but there are no real ‘instant classics’ on this album, all songs just flow by without staying in your mind. On this album you mainly find mid-tempo songs, very atmospheric and focused on the ‘folk’ in ‘folk-metal.
Certainly, ‘Nagelfar’ didn’t turn out as a bad album. However, I secretly hoped for more. It’s more of the same, without some genius songs which could be classics. I hope they can still surprise me with their next album.