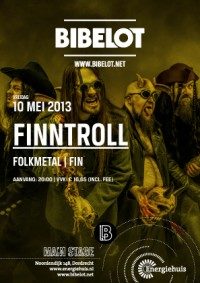 On a Friday-evening in May we’re off to Dordrecht to the Bibelot more precisely where Finntroll will be performing tonight. These guys are on tour with a new album in their pockets Blodsvept entitled, and which you probably have heard by now!

The supports are Killfloor Mechanic and Keep of Kalessin this time. The first one is a Death metal band form Hamburg and they we’re a nice one to start with and to warm everyone up.

After this it’s time for the Norwegian band Keep of Kalessin which had a change in their line-up. The three-piece promoted their guitarist to leadsinger which seems to be working well. With a lot of energy they threw their discography at us. The audience seemed to exist of experts and people who where positively overwhelmed by this band which exists for almost 15 years now.
Neat show!

The Bibelot has moved recently to the ‘Energiegebouw’, which houses range of cultural institutions. They have given a lot of thought to the construction of the venue. With staircases at the side, a bar in the back and balconies, you have the feeling you’re always close. You’ll get your beer in a glass, so you can enjoy it for a change. The toilets were a little bit less, the doors led to the toilets let in a lot of daylight when they were open, and this distracted you attention. Later on when it became dark outside, the shutters were opened and you could see the sky outside. Cool!

After a short change of stage-equipment, the guys of Finntroll entered the stage. I expected it a bit, regarding their promo photo’s, but still it’s a bit strange when you see them completely in style with troll-ears and everything. The steampunk Trolls took their instruments and started with a track of the new album ‘Mordminnen’. Immediately they break loose, this track is perfect to start with. And the audience agrees with that, because form the very first note there’s a lot of enthusiastic dancing.

Without pausing they go on with ‘Under Bergets Rot’ of the Nifelwind album followed by ‘Midnattens Widunder’. And by doing this they have mentioned three album in the very first three songs. Marvellous!
Vreth is handling the enthusiasm of the audience with great skill and manages to whip them to ecstasy. They used a poll so the audience could vote for a song on the set-list and have some influence on the show by doing this. Obviously this works out nice, because you got to hear everything you wanted to hear (Sorry, if yours wasn’t on the list)

Respect for Finntroll which always knows how to create a new sound within their own. Again on this new album, which was played almost entirely this evening, they have managed to do so. But there’s no doubt it’s Finntroll.
Good show, I can’t wait to Fortarock XL where the trolls will be amongst Amon Amarth and Rammstein to blow our ears off.