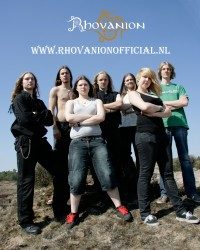 It’s a cloudy saturday evening when all metalfans from Gelderland head for a town called Harderwijk. Estrado is quite a new building with enough parking space and I must say it’s a beautiful hall.

The first band of the evening was Myrkvar from Nijmegen. This band from Gelderland is known fort heir great violin parts and Dutch lyrics. They opened up with “Voorspelling”, Hrabnilaz the vocalist and violin player Fusilan where very exited and worked really hard to get the crowd going. But the sound was very bad, everything turned into on big blur of noise. Due tot his, the crowd wasn’t really going for it either. The second song, “Nagelschip” had the same problems with the sound. From the third song “Gjallarhoorn” on to the end of the set, these problems where fixed and because of the enthusiasm of all bandmembers, but especially of Hrabnilaz and Fusilan worked out very contagious it became a big party.Ofcourse Myrkvar played there well known songs like Asenbloed, Twistengod, Widars Wraak and Geboren uit Oorlogslendenen. And fortunatly Myrkvar treated us with our daily amount of vegetables by giving us Trollen met de Prei (Trolls with the Leek).
After having a difficult start, Myrkvar fought back bravely and managed to get everyone banging their heads.
Score: 7/10

Just after I bought myself a patch of the second band, they had to show us what they got on stage. Rhovanion is a band with seven members, which causes the stage to be quite full, but yet the stage wasn’t filled well. But first let me tell you that with Rhovanions amazing violin, whistles and bagpipe they form a new wind in the Dutch folk-metal and even when I listen to foreign bands, Rhovanion is something unique. The know songs from there CD where all played for us and they done so amazingly. As well the Harderwijkers, who played in their hometown, had space for a new song they had never played live before. They might have to practice just a bit more on that one. Concerning the stageperformance, these Gelderlanders should switch some places to get the violinplayer and the guitarist at the front of the stage, they are the guys who make the best contact with the crowd. Still Rhovanion knew how to build a hell of a party in front of their home crowd. They really made my trip wort hit! Good job guys, keep it going!
Score: 7,5/10

The last band of tonight is the real pride of Gelderland ofcourse, Heidevolk. They just came home from America, this guys where ready to play for us already. Recently singer Joris left the band and I was a bit scared about missing him a lot. For tonight Mickael took his place, he is known from Mondvolland and that made me doubt if he was capable of it, I only heard him sing blackmetal songs like Pestvogel.
As always Heidevolk started with Nehalennia. After that all the big Heidevolk hits where performed, Walhalla Wacht, Een Nieuw Begin, Als de Dood weer naar ons Lacht, Ostara, Beest bij Nacht, Het Bier zal weer vloeien. But there was time for the real old Heidevolk as well, they played Krijgsvolk and I was happily suprised when I got the chance to go all out on Furor Teutonicus again. Due to a technical problem there was an extra sing-along, and I want to ask this, Mark, was it just me or where you really singing In Extremo – Villeman og Magnhild?
But guys, what an amazing show once more! The sphere, the sound, just perfect.
The stand in from Mickeal was better than I expected, even though he made some big mistakes. Than we get at the last song, a song written by a Dutch band called “Normaal”, Vulgaris Magistralis. I found it odd when Rowan called it “their contribution to the Songfestival” because for the songfestival you must write the songs by yourself.
Despite that, and despite that it’s a very popular party song, I’ve just had it with this one. In an amazing setlist without time for great songs like Wapenbroeders, Reuzenmacht, Koning Radboud and personally I’d give a lot to hear Winteroorlog once more, but they can’t fit all-in one set, I get that and I respect that. But if you don’t play Wodan Heerst just to have time for such a lousy cover, sorry, it’s just a little dissapointment at the end of every gig. But at least it gives me time to sneak to the back of the crowd.
Anyways, gentlemen, wow, what an amazing evening once more!
Score: 9/10