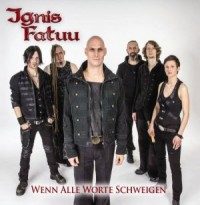 It’s been a while since we heard something from Ignis Fatuu, this isn’t strange if you know they parted with their singer last year. Changes of vocalist are always a bit risky, but they have to be made sometimes. A new singer can give a bit a whole new sound. Fortunately Ignis Fatuu doesn’t let us wait for their full length to listen to their new singer. No they’ve released a single, giving us the opportunity to listen to their new singer.
This single contains three songs. ‘Wenn Alle Worte Schweigen’ is a kind is song in the ballad like style we know from ‘Stille Wasser’. Maybe not as good as that one, but it’s a close call. The voice of P.G. The new man is very nice. It fits perfectly to Irene’s voice, which gives a spectacular effect in this kind of songs. I’m convinced already.
The second track of this single is the fable ‘Die Rabe und der Wolf’, a nice much more solid track with very nice bagpipes. Again a nice composition which shows the Ignis Fatuu is going on along the line they have set out the previous years.
The third track is a remix of ‘Die Rabe under der Wolf’, and I can only say, if you have some space left on a disc, leave it black. The technical trick they did with this song only annoy me. Without this song I could put this thing in replay for half an hour certainly.
Ignis Fatuu is back, that’s for sure. P.G.’s voice fits perfectly to Ignis Fatuu. And with this single they prove their compositions are as strong as we’re used to. Damn with this taste in my ears I only want to listen to the new album more. I’m certain I’m going to listen to this a lot until their new album is out. Spread the Word: IGNIS FATUU IS BACK!!!