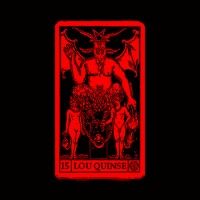 Lou Quinse, the Francoprovencal singing folk-metalband form the north of Italy decided a while a go to rework their first demo. They remastered the songs and added a new one “Lo Pal” the Occitan extreme version of the antifascist Catalan anthem by Luis Llach “L’estaca”.
This ‘re-issue’ starts with flutes in the a nice folk-classic song. The typical French folk is obvious, but it’s all done with a fierce metal taste. The medieval folk-songs remind of Saltatio Mortis a bit, but then with a different coating. Where SaMo gives it all a medieval rock taste. Lou Quinse spices it with real metal.
Para lo lop is a song in the same style. Very nice, I like these kind of traditional songs a lot and done with this nice metalsound they’re even more tasty. It’s obvious it’s a demo, the quality of the recordings can be improved a lot. But it’s not that bad, you won’t listen to it.
And with a nice scream they enter Calant de Villafrance. Again a nice ancient track pimped with fierce raw vocals, metal-instruments and a lot of authentic instruments. You’ll have no time to take a little nap with Lou Quinse while their music is bursting of highly energetic enthusiasm.
Ai Vist lo lop is a song from the 16th century, when you listen to medieval bands every now and then you know it for sure. But with the metalvocals it’s very nice to hear it once again.
The over 6 minutes lasting song Seguida de boreias a tres temps is the last one of the original demo. Lou Quinse has done a nice job with the remastering. It sounds more mature, where the original demo are merely the bare recordings of the songs, there more soul in the music this time. The metal is more pronounced on this album giving it all a nice Lou Quinse style.
Lo Pal is the only newer track on this album and it fits nicely in this album.
The recordings are not the nicest ones you’ve ever heard, but this is a nice mix, which gives it a nice metal taste. But what I like most at their album is their style of music. Lou Quinse has this nice metalsound with a lot of authentic instruments and their love for these nice Medieval songs makes it all quite original. I can’t wait for a full length with proper recordings.